From CultuRecode DhuriNya Project: “We found in our six-year research project that there are thirty-four different parenting goals of people who are Colonial Heritage Australians and Aboriginal Australians. One of the biggest differences is the concept of independence versus interdependence. We observed and experienced this difference so many times in our study. While Non-Aboriginal Colonial heritage people embrace independence and emphasise self-expression, personal uniqueness, and self-sufficiency, Aboriginal Australians emphasise interdependence, group solidarity, social hierarchy, and personal humility . . .

In our comparative study it was vital that we study the Individual-First mindset representatives’ foundation instinct of Individualism. Individualism is the idea that the individual’s life belongs to him and that he has an inalienable right to live it as he sees fit, to act on his own judgment, to keep and use the product of his effort, and to pursue the values of his choosing. It’s the idea that the individual is sovereign, an end in himself, and the fundamental unit of moral concern . . .

The Individual Mindset belief that when you get old enough you should go out on your own and live your own life is very different to the Indigenous Australian and Collective worldview. Competitiveness is a big part of most people in the Colonial Heritage Australian life today. Progressing is important and not having ambition is thought of as a negative. Respect and trust are meant to be gained, not given automatically. Children are not often seen as having caregiver responsibilities.

Members of cultures in which Individualism is emphasised have an increased tendency for making the fundamental attribution error—explaining the cause of a person’s behaviour by reference to their innate character traits or personality rather than external sources. Jack is late because he is lazy, rather than Jack is late because of poor traffic. Because members of cultures that emphasise an independent self-construable are more likely to see themselves as independent agents, they are also more likely to perceive the behaviours of others as independent of context also . . .

Parenting for Australian Aboriginal & Torres Strait Islander people is to let the child know who they are in relation to their family, kin, community, environment, the ancestors and the land.

These relationships define a child’s identity, by defining how they’re connected to everything in life. 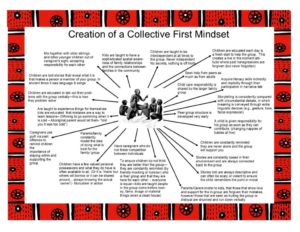