From VICE: “Sometimes when I’m standing on a platform of the London Underground, I stare at the billboards opposite. They advertise holidays to places like Egypt and the Caribbean. They depict turquoise waters and happy, splashing children. Imagine that, I think. Imagine encouraging people to fly to the Caribbean at a time like this.

We’ve got around 10 years to radically change course before climate change becomes so irreversibly catastrophic that it could end civilisation within our lifetimes. Coral reefs are becoming so bleached by warming oceans that it might not be long before those turquoise waters cease to exist. Now a new report backed by the former chief of Australia’s military suggests a ‘high likelihood’ of civilisation coming to an end by 2050.

These aren’t melodramatic statements. They’re just the mundane facts of this era. It’s just how it is. And yet here we are: re-doing our kitchens, flying in airplanes, getting pissed and throwing up outside Wetherspoons on a Friday night, as though everything is normal. I’m glad I don’t take the tube much, because I never feel so alienated from humanity, so full of despair, and frankly so insane, as when I see those billboards . . .

When describing the experience of having depression, the writer Tim Lott said: ‘Sometimes you may have the overwhelming desire to stand in the street and scream at the top of your voice, for no particular reason.’ That’s what climate grief feels like. Although you suspect that even if you did stand in the street and scream, no one would hear it. Sometimes climate grief feels like trying to warn everyone of a massive government conspiracy to kill us all, except it’s a conspiracy that’s in the news; that everyone already knows about, and no one really minds . . .

In Freud’s essay Mourning and Melancholia, he says that grief and depression are similar experiences, except that with depression your existential self unravels, alongside all of the emotions that result from loss. Climate grief is more like depression than bereavement. You do feel a sense of loss, because things are dying and you’re reminded of it everywhere, but you also have the madness that comes with ‘mental illness.’ You are acutely aware that you see the world in this new and terrible way, and that it is intensely real, but that this awful truth isn’t reflected back at you in the world anywhere . . .

The scant attention given to climate change evokes another characteristic of depression: rage. Depressives often talk of being angry at the world, and people around them, for not acknowledging the enormity of their despair . . . I’m angry with people I like, and people I love. I’m angry with them when they have children, and they don’t then immediately devote themselves to averting what is coming. I’m angry with them when they go on about Brexit, as though it matters compared to this . . . Why aren’t we all talking about it all the time? Why aren’t you as worried as I am? What the fuck is wrong with you?

Rebecca Solnit once wrote that ‘hope is not a lottery ticket you can sit on the sofa and clutch, feeling lucky. It is an axe you break down doors with in an emergency.’ I have activist friends who used to read that sentence out to me for inspiration, and I would nod along without really understanding what it meant. Now I get it. Hope is not the act of fantasising about something wonderful happening; it’s a survival instinct. Hope doesn’t replace despair, it rebels against it.

The truth is, how we react to climate change is still up for grabs. How bad it gets and the kind of world we build from it is our decision to make. We shouldn’t suppress climate grief, but expand it out and use it as a gateway to action. Hope is the axe you break down doors with in an emergency. But first you need to recognise that the house is on fire.” 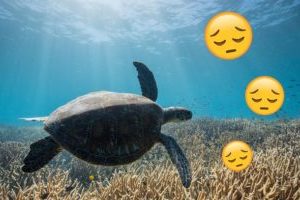