From The Washington Post: “In March 2016, the U.S. Centers for Disease Control and Prevention published a new guideline on the prescribing of opioids for chronic pain. It proved confusing.

The guideline said doctors should not increase an opioid dose to more than 90 MME (morphine milligram equivalents). But many patients already were taking far more than 90 MME, and doctors — thinking the CDC number was a hard cap — were tapering them back to 90.

Hundreds of doctors and other experts, including three former U.S. drug czars, signed a letter to the CDC in March of this year saying that the guideline had been widely misinterpreted, and the CDC concurred. In an article in the New England Journal of Medicine, the guideline authors acknowledged that medical experts don’t really know what happens to people forced to taper suddenly from high dosages: ‘We know little about the benefits and harms of reducing high dosages of opioids in patients who are physically dependent on them.’

In a remarkable study of Vermont Medicaid patients who used large daily doses of opioids for at least 90 consecutive days, Mark’s team found that half the patients were cut off with just a single day’s notice and 86 percent were discontinued in less than 21 days. Though 60 percent had an opioid use disorder before tapering, fewer than 1 percent of the patients in the study were given anti-addiction medication such as buprenorphine when their opioids were taken away. Predictably, 49 percent of them were hospitalized or visited an emergency room after they were cut off.

‘Some people will be fine. Some people will actually thank you and say, “I feel a little more awake now,” ’ said Kertesz, one of the leaders of the group that petitioned the CDC to clarify its pain opioid guidelines. ‘The cases that draw my concern are the cases where the patient says, “I don’t think I can survive what you’re going to do to me.” ’

When researchers surveyed 194 primary care clinics in Michigan in 2018, they found that 79 of them would not accept new patients taking opioids, according to a study published last month in JAMA Network Open.

‘We’ve entered a new era of opiophobia,’ said Sally Satel, a psychiatrist and resident scholar at the American Enterprise Institute who is critical of the way some chronic pain patients are being treated. Some ‘have the kind of pain that’s unbearable. Every day of your life. Unbearable. And those are the people who are suffering. And their doctors are terrified.'” 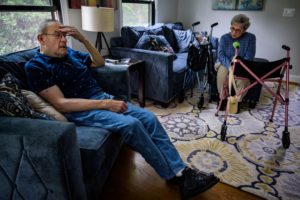