From Truthout: “The children weren’t alone in enduring severe emotional trauma because of the administration’s policy of ripping apart migrant families in a bid to drive down immigration rates through fear. According to the ACLU, ‘Several parents attempted suicide, and some tragically occurred.’

Some separated families have since been reunited, but others have not. The ACLU noted that ‘the administration’s care and tracking for the separated children was so deficient that when a federal court finally ordered the government to reunify families, government officials were unable to identify which child belonged to which parent.’

Plaintiffs in the lawsuit, docketed as A.I.I.L. v. Sessions, include families from Guatemala and Honduras who were separated at Arizona-Mexico border. In one case, 13-year-old Karina was separated from her mother Lorena, ‘on Christmas Day, and kept handcuffed to control her as her mother was taken away and then subjected to the trauma of 16 months of separation, without any regard for her preexisting mental health issues.’

Three-year-old Beatriz was taken from her father Jairo ‘after watching U.S. immigration officials violently remove another child from her mother. Later, Beatriz was physically abused by her caretaker while in the custody of the U.S. government,’ the complaint says. Six-year-old Andrés ‘was torn kicking and screaming from the arms of his father,’ Jacinto, ‘as Jacinto struggled to make uninterested guards aware of Andrés’ heart murmur. Jacinto was deported without Andrés, and Andrés did not see his father again for nearly 10 months.’ . . .

‘We think that the family separations was so extreme and so unprecedented that if ever there was a case warranting damages, it’s this one,’ Gelernt told the AP. Gelernt added that he hoped families could use some of the money to get mental health assistance and ‘put their lives back together.'” 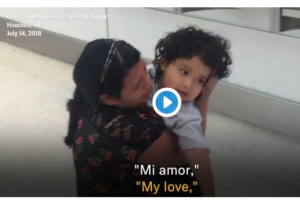