From ABC News: “A Pennsylvania jury ordered Johnson & Johnson and its drugmakers Janssen Pharmaceuticals to pay $8 billion in damages in a lawsuit over the anti-psychotic drug Risperdal that has been linked to the growth of breast tissue in boys.

The verdict came from a jury in Philadelphia County’s Court of Common Pleas Tuesday, and was the first in thousands of Risperdal cases pending in the Philadelphia court system to be heard.

It was also the first time a jury determined whether to award punitive damages — which they determined to be $8 billion to a single plaintiff — in a Risperdal trial.

‘Johnson and Johnson is a company which has lost its way,’ attorneys Tom Kline and Jason Itkin, who represented the plaintiff, said in a joint statement following the verdict.

Risperdal has been linked to a non-curable condition known as gynecomastia, the abnormal enlargement of breast tissue in males. Attorneys for the plaintiff argued that Johnson and Johnson marketed the drug without warning patients enough about its link to gynecomastia.

‘This jury, as have other juries in other litigations, once again imposed punitive damages on a corporation that valued profits over safety and profits over patients,’ the attorneys’ statement added. ‘Johnson & Johnson and Janssen chose billions over children.'” 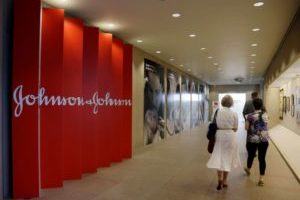