From NPR: “Meme awoke in the emergency room of St. Joseph Hospital in Nashua, N.H. She wanted to leave. But the hospital wouldn’t let her because Meme’s daughter and an emergency room doctor filled out a legal petition that said Meme was a danger to herself or others because of a mental illness.

After one of those petitions is filed, according to New Hampshire law, patients like Meme should be transferred out of the ER to a psychiatric care facility. They should also get a hearing before a judge within three days. That would be Meme’s chance to argue that she should not be held against her will.

But there’s a problem.

The result: Meme couldn’t leave the ER, and she couldn’t get a hearing. Not until a bed opened up.

‘And they won’t even tell you what number you are,’ said Meme of the hospital staff. ‘You ask every day, “What number am I?” “Oh, we don’t know.”’

Now Meme is one of a handful of plaintiffs being represented by the ACLU of New Hampshire in a federal class-action lawsuit against the state for not providing that hearing to her sooner.” 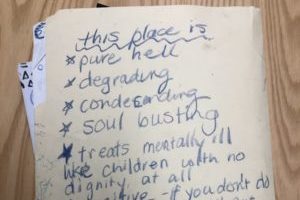