From Block Club Chicago: “Aiming to fill part of a massive void after the city closed half of its mental health clinics in 2012, West Siders have opened a new clinic to bring free mental health services to residents in need.

The Encompassing Center, 3019 W. Harrison St. recently opened and is focused on serving Garfield Park, North Lawndale and the Near West Side residents. It offers a wide scope of services managed by Catholic Charities of the Archdiocese of Chicago, including individual counseling and group counseling, with a special focus on trauma and substance abuse.

Any resident from the surrounding area can receive services for free by dropping in at the Encompassing Center or by calling 773-638-5703. Clients can also be referred by neighborhood groups, churches and schools involved in the center’s outreach.

To figure out which types of resources would be most beneficial to West Siders, the leaders behind the center completed a comprehensive community mental health needs assessment. The assessment found that the West Side’s most critical mental health issues are depression, substance abuse, and trauma, all issues that are exacerbated by stressors like crime and financial difficulties.

‘The good thing about this center is that none of the politicians can close it down,’ Ingram said, since the Encompassing Center is not contingent on the city’s budget. ‘We are a community funded program. We did it by knocking on doors and talking to people.'” 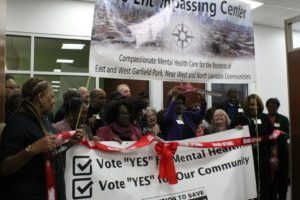