From HERE this NOW: “Although the ACEs study had been published three years earlier, I had never heard of it nor understood the impact of trauma on child development and behavior. The bit I understood about child development came from my graduate coursework and the work of Jean Piaget, John Bowlby, Erik Erikson and Daniel Goleman’s groundbreaking book, Emotional Intelligence.

In the first edition of Emotional Intelligence (1995), Goleman speaks to the early findings in neuroscience. His work indicated that when people experience rage they are hijacked by such strong emotion they cannot access the part of the brain responsible for reason and rational thinking. They literally can’t think straight.

That made sense to me.

Goleman’s description of the overwhelming somatic experience of rage resonated. The blindness, the swirling inner storm that surged and spewed out. I had experienced it with great frequency in my late teens and early twenties. I could recognize its swell in students. And yet, I was trying to teach them to override it with their mind.

Cognitive bias is rampant. It’s literally everywhere. It’s baked into the essence of what it means to be American. We speak this bias without recognition.

‘Happiness is a choice.’

These idioms reflect the long-standing belief that if we put our ‘minds to it’ we can overcome anything. These values and beliefs are further reflected in recent educational trends like encouraging ‘grit’ and ‘growth-mindset.’ The vast majority of what I see folks doing that claims to be ‘trauma-informed’ involves some version of cognitive bias or behaviorism.

Advances in science in the last thirty years help us realize the fallacy of ‘mind over matter.’

BUT, we are so tied to this belief that it highly agitates others when challenged. Bottom line, it has us wrestling with our identity as Americans.

Who are we if we aren’t self-made, pulled up by our own bootstraps, masters of our own destiny? 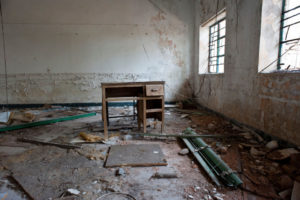