From The Nation: “When an announcement of a ‘Moral Injury Symposium’ turned up in my e-mail, I was a bit startled to see that it came from the US Special Operations Command. That was a surprise because many military professionals have strongly resisted the term ‘moral injury’ and rejected the suggestion that soldiers fighting America’s wars could experience moral conflict or feel morally damaged by their service.

. . . in the decade since the concept [of moral injury] began to take root among mental health specialists and others concerned with the emotional lives of active-duty soldiers and military veterans, it has come to be fairly widely regarded as ‘the signature wound of today’s wars,’ as the editors of War and Moral Injury: A Reader, a remarkable anthology of contemporary and past writings on the subject, have noted . . .

The idea remains controversial in the military world, but the wars that Americans have fought since 2001—involving a very different experience of warfighting from that of past generations—have made it increasingly difficult for military culture to cling to its old manhood and warrior myths. Many in that military have had to recognize the invisible wounds of moral conflict that soldiers have brought home with them from those battlefields.

That shift was evident at the moral injury symposium, held in early August in a Washington, D.C., hotel . . . What follows are some of the thoughts they provoked in my mind as I listened or when I later reflected on what I heard.” 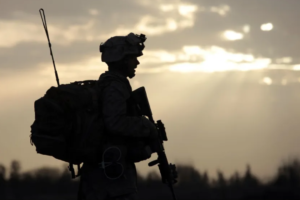