From The New York Times: “Published here for the first time . . . are gritty and highly personal depictions that put flesh, bones and emotion on what until now had sometimes been portrayed in popular culture in sanitized or inaccurate ways: the so-called enhanced interrogations techniques used by the United States in secret overseas prisons during a feverish pursuit of Al Qaeda after the Sept. 11, 2001, attacks.

In each illustration, Mr. Zubaydah — the first person to be subject to the interrogation program approved by President George W. Bush’s administration — portrays the particular techniques as he says they were used on him at a C.I.A. black site in Thailand in August 2002.

They demonstrate how, more than a decade after the Obama administration outlawed the program — and then went on to partly declassify a Senate study that found the C.I.A. lied about both its effectiveness and its brutality — the final chapter of the black sites has yet to be written.

Mr. Zubaydah, 48, drew them this year at Guantánamo for inclusion in a 61-page report, ‘How America Tortures,’ by his lawyer, Mark P. Denbeaux, a professor at the Seton Hall University School of Law in Newark, and some of Mr. Denbeaux’s students.” 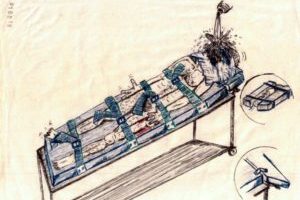