From AP: “A lawsuit filed by the family of a Connecticut teen who was placed into state custody after a dispute over her diagnosis and put in a psychiatric unit is scheduled to start Tuesday.

The suit was brought by the parents of Justina Pelletier against Boston Children’s Hospital and those who treated their daughter, The Boston Globe reported Monday.

‘Justina has suffered severe and debilitating psychiatric trauma as a result of being held against her will in a locked psychiatric ward, isolated from her friends and families, and enduring several months of treatment in which her physical symptoms and disease were denied by her primary caregivers,’ according to the suit, which will be heard in Suffolk Superior Court.” 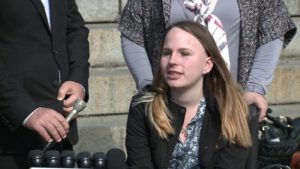