From Yale News: “Ask a high school student how he or she typically feels at school, and the answer you’ll likely hear is ‘tired,’ closely followed by ‘stressed’ and ‘bored.’

In a nationwide survey of 21,678 U.S. high school students, researchers from the Yale Center for Emotional Intelligence and the Yale Child Study Center found that nearly 75% of the students’ self-reported feelings related to school were negative.

The study, which appeared in the January edition of the Journal of Learning and Instruction, also involved a second, ‘experience sampling’ study in which 472 high school students in Connecticut reported their feelings at distinct moments throughout the school day. These momentary assessments told the same story: High school students reported negative feelings 60% of the time.

‘It was higher than we expected,’ said co-author and research scientist Zorana Ivcevic. ‘We know from talking to students that they are feeling tired, stressed, and bored, but were surprised by how overwhelming it was.'” 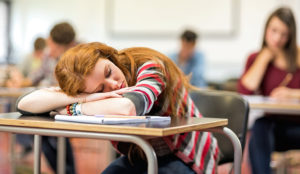