From The Laura Flanders Show: “Mab Segrest: In 1960, they’re half a million patients in state mental hospitals. And as those patients came out of those hospitals were, so called, de-institutionalized for community care, so it’s supposedly miraculous anti-psychotic drugs. There was also the beginning of a system of mass incarceration. The miracles of the drugs sometimes did not pan out, although the profits to big pharma did astronomically. And the community care promise was never funded because Nixon, and then Reagan gutted social spending. Today, 9 out of 10 psychiatric beds are in jails and prisons.

How did this happen? Well, there’s a reason that it happened. It is comprehensible. I want us to understand more deeply from Administrations of Lunacy how racism and white supremacy has always haunted state psychiatry and, through that, our understandings of our mind of what’s normal or not, of how we should be treated and how we should move forward in our families, in our communities, in our culture.” 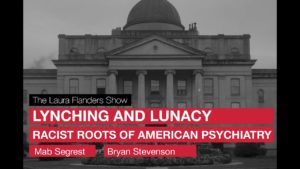