From CBC: “A surveillance video that is part of a civil lawsuit filed in B.C. Supreme Court shows an RCMP officer in Kelowna dragging a female nursing student down a hallway and stepping on her head after a wellness check at her apartment.

The suit alleging physical and emotional abuse was filed by Mona Wang, a student at the University of British Columbia’s Okanagan campus in Kelowna, against RCMP Cpl. Lacy Browning on March 23.

The officer disputes the claim, saying that only necessary force was used to subdue the student when she became violent. In Browning’s statement of defence, filed June 15, she alleges Wang had a box cutter in her hand and denies that she assaulted the student.

None of the allegations has been proven in court.” 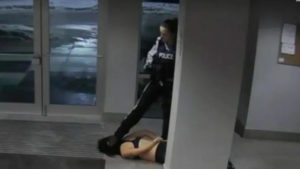