From The Cut: “For the first time, people with suicidal thoughts or behaviors will have access to a ketamine-like nasal spray that treats depression. On Monday, the Food and Drug Administration approved Spravato, a close chemical cousin to ketamine that was developed by Johnson & Johnson, for those contemplating suicide. (It had been approved in March 2019 for people with depression who have taken other medication without results.) . . . While ketamine is a somewhat controversial drug, the nasal spray’s approval comes at a time when doctors are concerned about increased suicide rates amid a seemingly never-ending pandemic . . .

The hope is that Spravato could be a quick way to help someone in the midst of an urgent depressive episode. Unlike other antidepressants that can take weeks to kick in, the nasal spray reduces symptoms like sadness, hopelessness, and changes in sleep within 24 hours, according to research from Johnson & Johnson (though its ability to reduce suicidal thoughts was not statistically different from those given a placebo).” 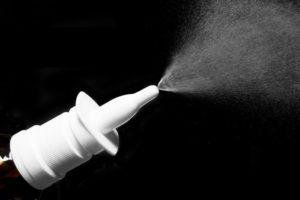