For Americans between 18-24 years old, 25.5 percent — just over 1 out of every 4 young Americans — said they had. For the much larger group of Americans ages 25-44, the percentage was somewhat lower but still extremely alarming: 16 percent. A total of 18.6 percent of Hispanic Americans and 15 percent of African Americans said they had seriously considered suicide in the past month. The two groups with the largest percentage who said yes: Americans with less than a high school degree and unpaid caregivers, both of whom have 30 percent — or almost 1 out of every 3 — who answered in the affirmative. A full 10 percent of the U.S. population generally had seriously contemplated suicide in the month of June.

In a remotely healthy society, one that provides basic emotional needs to its population, suicide and serious suicidal ideation are rare events. It is anathema to the most basic human instinct: the will to live. A society in which such a vast swath of the population is seriously considering it as an option is one which is anything but healthy, one which is plainly failing to provide its citizens the basic necessities for a fulfilling life . . .

Much attention is devoted to lamenting the toxicity of our discourse, the hate-driven polarization of our politics, and the fragmentation of our culture. But it is difficult to imagine any other outcome in a society that is breeding so much psychological and emotional pathology by denying to its members the things they most need to live fulfilling lives.” 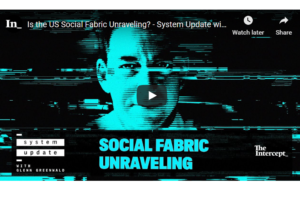