From MetroUK: “People coming off antidepressants could benefit from decreasing their dose very slowly to avoid withdrawal effects, new guidance from the Royal College of Psychiatrists says.

The official information, published last week, recognises that many patients suffer adverse effects from stopping medication, such as increased anxiety, dizziness, or the feeling of an electric shock in your arms, legs, or head which is sometimes called ‘zaps’. It says that in most cases, people should stop taking their medication over a period of at least a month and perhaps much longer, not reducing their dose in a matter of weeks. In the past, prolonged withdrawal experiences were seen as rare and often attributed to a relapse of the original depression or other condition being treated.
However, official information is now catching up with what many patients have been describing for years. In September last year, NICE amended its guidance to recognise that withdrawal symptoms can persist for months or more and be ‘more severe for some patients’. Previously, it had said that such symptoms were ‘usually mild and self limiting over about one week’.”
Link to the new guidance: https://www.rcpsych.ac.uk/mental-health/treatments-and-wellbeing/stopping-antidepressants 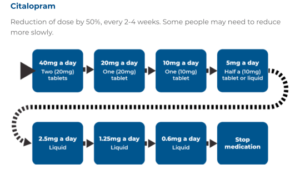