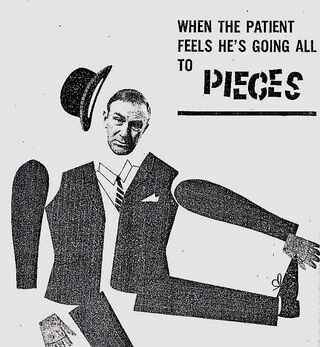 The history of antidepressant withdrawal dates to the first articles on imipramine in the late 1950s, when the newly created tricyclic was introduced to psychiatric hospitals as an “interesting and promising antidepressive.”

More than a half-century later, after well-publicized assurances by academic psychiatry that withdrawal from later-generation SSRI antidepressants is “mild, transient” and “self-resolving,” it is useful to compare discussion of both generations of psychiatric drugs and to focus on shared efforts to deny and minimize their withdrawal syndromes.

This article—part of a series offering a deep dive into the history of antidepressant withdrawal—puts under renewed scrutiny academic and industry claims that SSRIs are broadly “well-tolerated.” From the outset, we’ll see, their record—like that of their earlier counterparts—has in fact been mixed and raised multiple flags.

Within two years of its 1957 launch on both sides of the Atlantic, imipramine was found by one important study by researchers Andersen and Kristiansen to have “led to secondary effects or complications in nearly all cases”—in total, 27 men and 58 women. The study was published in Acta Psychiatrica et Neurologica Scandinavica, a still-prominent European journal of psychiatry. Although it drew favorable conclusions about imipramine, with “mild or medium depressions” described as “cured or ameliorated in 4/5 of the cases” (following 3-6 month treatment), the article provided a systematic appraisal of the drug’s “secondary effects” and “complications,” which were found to recur with a frequency and intensity that conflicts with the study’s ultimate verdict.

The fact that antidepressant withdrawal was flagged at the outset, with serious “withdrawal symptoms … observed in 15 [out of 85] cases”—in this study, 17.6 percent—“lasting about 3 days, both following gradual and acute termination of treatment,” helps underscore why a battle would ensue—much like the one that would be fought over benzodiazepines and minor tranquilizers such as Valium—to downplay and limit study of the short- and longer-term consequences of those harms, including by representing them as a “discontinuation syndrome.” The phrase implies a premature ending of treatment, suggesting a need to reinstate but alter dosage or switch to a different kind of antidepressant.

In The Antidepressant Era, David Healy provides a granular account of the way drug-maker Geigy marketed imipramine as Europe’s first antidepressant. Initially known as G22355, the compound was sent to trusted clinicians such as Roland Kuhn, then based at a large (700-patient) state psychiatric hospital in Münsterlingen, northern Switzerland. Healy’s account describes a process fraught with trial and error, with the drug-maker sending the researchers an array of compounds whose “psychotropic effects” turned out to be “indistinct.” With the hospitalized patients in this case unable to provide informed consent, as the drugs’ adverse effects were largely unknown to researchers and manufacturer alike, the randomness of the testing and experimentation with dosage is notable.

First tested by Kuhn as an antipsychotic, G22355 was given to a group of patients diagnosed with schizophrenia. As Healy recounts, “The study design was that those on chlorpromazine were taken off that drug and put on the new one,” presumably without being told about this, to minimize the influence of placebo, “while those newly admitted, who were drug-free, also had G22355 given to them,” likely on identical terms, for the same reason. “It was administered to over three hundred patients with a variety of conditions. Many of the patients previously on chlorpromazine [an antipsychotic] began to deteriorate, becoming increasingly agitated. Some appeared to become hypomanic.”

By 1955, Kuhn had readied a second trial to study the compound’s effects on those diagnosed with depression. Although the study eventually would include 40 patients, Healy describes the responses of the first three as “so dramatic that company scientists, ward nursing staff, and Kuhn [himself] had little doubt that the treatment was effective.” There is a strong suggestion here of a rush to judgment—of enthusiasm at rapid change overwhelming caution about the almost-immediate manifestation of mild-to-serious adverse effects, potentially with longer-term harms. After six days on imipramine, the first of these patients, Paula J.F., was said to be “completely transformed.” A mere 17 days later, long before further patients could be added and properly assessed, Kuhn sent in a drug-study report “strongly endorsing the drug as a potential antidepressant.” He had done so on the basis of 1-3 patients, themselves undergoing treatment for a week and less.

Over the next three years Kuhn went on to treat more than 500 patients with imipramine, and many of them also reported becoming manic on the drug, an adverse effect identified in later studies as well. Nevertheless, Kuhn firmly represented the drug as “an antidepressant but not a euphoriant.” Healy’s broader assessment suggests extensive cherry-picking over preferred outcomes: “He picked out the features of a syndrome that he felt was particularly likely to respond, a state that for some time ha[d] been called endogenous depression, vital depression, or melancholia.”

Kuhn’s reckoning was that pharmacology could serve as a basis for treating neurotic states, in which “depressions” were then broadly included. His perspective was shared by some psychoanalysts willing to use psychotropics and psychostimulants to accelerate talk therapy, on the basis that they might “promot[e] verbalization of repressed and subconscious material,” according to Joseph Davis.

Keenly alert to imipramine’s vast market potential via expanded diagnostic parameters and treatment categories, Kuhn soon pitched his colleagues in biological and psychoanalytic-based psychiatry on both sides of the Atlantic, in language mixing boosterism with periodic but unmistakable signs of messianism:

“An important field of research opens up here, rendered accessible for the first time by the recent development of psychopharmacology, and touching not only problems of psychiatry but also those of general psychology, religion and philosophy,” Healy quotes Kuhn as saying.

The evidence base accruing around these new compounds was, by contrast, far less favorable. Although Andersen and Kristiansen’s earlier-described 1959 study of imipramine-treated depression concluded that “the drug can cure or improve about four-fifths of patients with endogenous depressions,” it dwelled at length on the fact that the drug “led to secondary effects of complications in nearly all cases.”

In addition, imipramine was withdrawn from 2 male and 5 female patients “due to complications”:

One of these patients was a 39-year-old man who had previously been well, apart from slight infections and pneumonia 6 months previously. Prior to treatment he did not manifest symptoms of somatic abnormality, and the EEG was also normal. During the first 5 days of treatment he suffered from universal motor restlessness in the form of unintentional, coarse jerking movements. This disturbance intensified in spite of reduction in the dosage to such an extent that the patient was hardly able to descend the stairs or feed himself. When at its height, there were myoclonia [involuntary muscle spasms] and jerky, throwing movements of the head and extremities. His gait reminded one of ataxia [impaired coordination as when drunk] and on the whole he resembled a case of Huntington’s chorea [due to cognitive and motor-based decline].

The patient’s rapid deterioration from “previously … well” to “hardly able to descend the stairs or feed himself” is striking and alarming, not least with 19 other patients (23.5 percent of the study overall) “manifest[ing] motor disturbances” less severely, representing a tendency to tardive dyskinesia (involuntary twitching and muscle spasms) in one-in-four patients in the study overall. Just as striking regarding the 39-year-old man, “the pattern returned to normal shortly after [imipramine] had been withdrawn,” suggesting with little doubt that the drug was ultimately the cause.

Given their general uninterest in longer-term effects and repeated rhetorical efforts at downplaying the consequences, especially relative to the sheer number of adverse effects reported, Andersen and Kristiansen’s overall extrapolation seems unduly favorable toward the drug. Prescribing doctors were advised: “only a few manifested skin disturbances”; “at least the mania did not appear to become worse during treatment”; and “the patients suffered from various secondary effects, but there were no deaths or lasting complaints.”

1959 turned out to be a watershed year for studies of antidepressant withdrawal. In the same year, A. M. Mann and A. S. Macpherson, researchers at Montreal General Hospital and McGill University, published a study of 70 students (50 female, 20 male) with mild, moderate, or severe depression, 53 of them treated in-hospital and 27 as outpatients. After three weeks, on dosages ranging from 50-300 mg/day, 20 (28.5%) of the patients were assessed as “recovered,” based on criteria established by H. E. Lehmann the previous year, with a further 24 (34.2%) considered “much improved,” while 9 patients (12.5%) were found to be “unimproved” and 4 (5.7%) were assessed as faring “worse.”

Of those, two patients “had to be withdrawn from the drug after only two days’ medication,” because “both stated they felt ‘completely overwhelmed’ by the drug, with very marked dizziness, severe palpitations, jerky movements, and markedly increased tension and agitation on the usual initial dosage scale.” In another case, “a toxic psychosis with hallucinations and delusions was seen … after one week of administration of the drug. This subsided on discontinuation of the drug.”

Overall, they concluded: “We feel the problem of side effects to be one which merits serious consideration.” So frequent were the side effects of one type or another, they worried, that “fewer than 10% of patients were completely free of them.”

In my next post on this topic, we’ll see significant parallels arise between the 1950s and 1980s, as SSRI antidepressants are introduced and similar withdrawal issues emerge.