From The New Yorker: “I might never have realized how much was missing from my recollection had I not read in a ‘Christmas Carol’ marathon at the Housing Works Bookstore earlier this month. My assigned passage was the one in which the Ghost of Christmas Past takes Scrooge to revisit a scene from his childhood. I was totally unprepared for how sad it was. The two of them fly out a window in London and arrive at the underheated country schoolroom where Scrooge, as a little boy, has been left alone for Christmas, after all the other boys have gone away on ponies. Scrooge weeps ‘to see his poor forgotten self as he used to be,’ reading alone in a corner. Then the Ghost shows him some of his favorite literary characters, the ones who kept him company as a child, and he laughs with delight. This is also depressing, because the characters include Robinson Crusoe’s parrot and Friday, and what could be sadder than an abandoned kid reading Robinson Crusoe alone over Christmas? As if realizing this himself, adult Scrooge, ‘with a rapidity of transition very foreign to his usual character,’ feels a new wave of pity for his child self—and, with it, regret for how, the previous day, he had chased away a child who was singing Christmas carols at his door.” 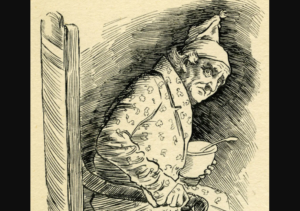