From The New York Times: “I came to realize over time how irrelevant diagnostic labels such as bipolar disorder and major depression are to understanding deaths by suicide. I noticed that all too often, these patients’ troubles began with childhood trauma and frequently ended with economic deprivation. One person who later died by suicide told her therapist that she sold her jewelry to make ends meet; another asked his therapist how to get a couch for his apartment. So many people who died by suicide weren’t just starving for therapeutic attention. They were starving.

There is no one cause for any suicide. But research shows that there is a connection between people’s ability to pay rent each month and their mental health.

As politicians debated increasing the federal minimum wage to $15 per hour, I thought about the deaths I was reviewing. There’s a moral argument that Democrats should be making, but are not. Along with increasing social mobility and addressing inequality, raising the minimum wage has the potential to lower the country’s suicide rate. The Covid-19 pandemic has raised concerns about a coming mental health crisis, and a wage hike should be discussed as not just good economic sense but also critical mental health policy.” 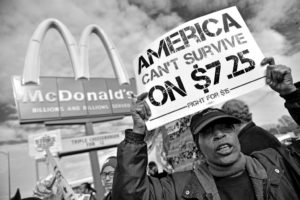