From The New York Times: “Like most science reporters, I had wanted to report on something big, to have a present-at-the-creation run that would shake up our understanding of mental health problems. At minimum, I expected research that would help people in distress improve their lives.

But during my tenure, the science informing mental health care did not proceed smoothly along any trajectory . . . [and] did little to improve the lives of the millions of people living with persistent mental distress. Almost every measure of our collective mental health — rates of suicide, anxiety, depression, addiction deaths, psychiatric prescription use — went the wrong direction, even as access to services expanded greatly.

. . . Government agencies, like the National Institute on Drug Abuse and the National Institute of Mental Health, continue to double down, sinking enormous sums of taxpayer money into biological research aimed at someday finding a neural signature or ‘blood test’ for psychiatric diagnoses that could be, maybe, one day in the future, useful — all while people are in crisis now.

. . . These kinds of big-science efforts are well-intended, but the payoffs are uncertain indeed. The late Scott Lilienfeld, a psychologist and skeptic of big-money brain research, had his own terminology for these kinds of projects. ‘They’re either fishing expeditions or Hail Marys,’ he’d say. ‘Take your pick.’ When people are drowning, they’re less interested in the genetics of respiration than in a life preserver.

. . . There’s a reason that so many people use binge drinking, playing the lotto and runaway eating to support their mental health: because the effects are reliable. Because they don’t require a prescription. And because they’re available, right now.” 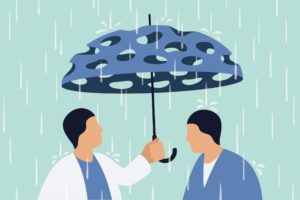