From Sacredphrenia: “Earth without sufficient shamans is rather like a big blue melon going bad in the back of God’s refrigerator. I’ll never forget this old cartoon hanging on the wall of my dad’s office. ‘This has really started to go bad… maybe I should toss it,’ God says, poking the rotting fruit.

Years later, I would read these incisive words written by Graham Hancock and the message would be completed: ‘The rot sets in from the moment that any culture begins to devalue its shamans as madmen.’

But how are we to select people for such a high office? Traditionally, it was the person who became afflicted with ‘the madness of the gods’ who must answer the call to become a shaman. He or she would begin displaying very odd behavior that in our society would be regarded as patently psychotic. Their initiation was often a slow, grueling, terrifying ordeal.

Take this excerpt from historian Erwin Ackerknecht’s tribal ethnographies, for instance: ‘He who is to become a shaman begins to rage like a raving madman. He suddenly utters incoherent words, falls unconscious, runs through the forest, lives on the bark of trees, throws himself into fire and water, lays hold on weapons and wounds himself, in such ways that his family is obliged to keep watch on him. By these signs it is recognized that he will become a shaman.’ 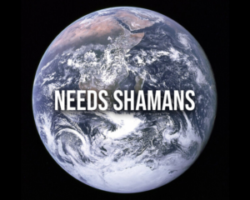