From City Journal: “The story of American deinstitutionalization has become familiar. In a long arc—from President Kennedy’s Community Mental Health Act of 1963 to the present—federal and state governments dismantled mental asylums and released the psychiatrically disturbed into the world. Though there were sometimes brutal abuses in the state mental hospitals of the early twentieth century, the closure of the asylums did not put an end to ‘mental illness.’ If anything, with the proliferation on the streets of psychosis-inducing drugs such as methamphetamine, the United States has more cases of serious ‘mental illness’ than ever before—and less capacity to treat and manage them.

The question now is not, ‘What happened to the asylums?’ but ‘What replaced them?’ Following the mass closure of state hospitals and the establishment of a legal regime that dramatically restricted involuntary commitments, we have created an ‘invisible asylum’ composed of three primary institutions: the street, the jail, and the emergency room. In slaying the old monster of the state asylums, we created a new monster in its shadow: one that maintains the appearance of freedom but condemns a large population of the ‘mentally ill’ to a life of misery.” 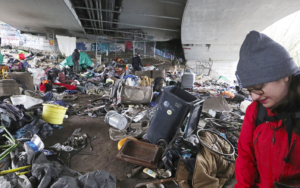