From Journey’s Dream/On Your Mind Podcast: “It’s alarming to know that there’s a rising burden of mental illness globally, especially for those diagnosed with schizophrenia or bipolar. It’s time to rethink psychiatric care and focus on providing solutions for mentally ill patients. The author of Mad in America, Robert Whitaker, shares his knowledge on psychiatric care and what has been wrong for so long. He talks about his argument on modern treatments, medicine, and the human rights model. Robert is an American journalist covering medicine, science, and psychiatric research. In this episode, he joins Timothy J. Hayes, Psy.D., to discuss mental health issues, how society views psychiatric patients, and how our societal narrative has been the driving force for what we tolerate and allow. Tune into this conversation and learn what kind of outcomes that mindset would result in and the importance of creating non-traumatic environments today for people.” 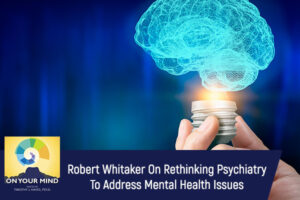