From Mindful: “We humans are a social species. We live in groups. We take care of one another. Part of being a social species, it turns out, is that we regulate one another’s body budgets. Your body budget is your brain’s accounting of the bodily resources (like water, salt, glucose, and so on) it has to spend and save. Each action that spends resources, such as swimming or running, is like a withdrawal from your account. Actions that replenish your resources, such as eating and sleeping, are like deposits. Your brain tries to predict and meet your biological needs before they arise, to balance your body budget proactively.

The people around you influence your body budget and even rewire your brain. Your brain changes its own wiring after new experiences, a process called plasticity. For example, microscopic parts of your neurons, called dendrites, become bushier, and their associated neural connections become more efficient. This remodeling job requires energy from your body budget, so your brain needs a good reason to splurge. And a great reason is that the neural connections are used frequently to deal with the people around you. Little by little, your brain tunes itself as you interact with others.” 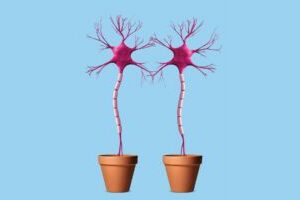