From Politico: “Gov. Gavin Newsom on Thursday signed into law the so-called #FreeBritney bill, legislation designed to reform the state’s legal guardianship laws that critics say have led to the exploitation of many Californians, including pop star Britney Spears.

The bill by Assemblymember Evan Low (D-Campbell) holds professional conservators to a higher standard by requiring them to disclose their fees online, prohibits financial conflicts of interest involving the conservator and increases enforcement actions against those who are not acting in their clients’ best interest.

‘California’s conservatorship system is failing people from every walk of life, whether they are a global superstar whose struggles unfortunately play out in public or a family unsure of how to take care of an elderly parent,’ Low said in a statement after the signing. ‘This bill saw unanimous, bipartisan support throughout the process because it’s painfully clear that we can and should do better.'” 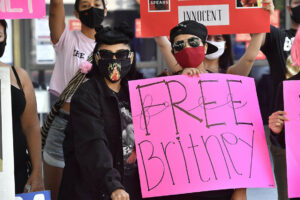