From The Daily Mail: “Pam Hickmott was beside herself when she last spoke to her 44-year-old son Tony. ‘Can I come home?’ he begged. ‘I want to come home now. Home, please.’

She tried to reassure him: ‘Soon, Tone. You’ll be home soon. I promise.’ But her son, who has autism, couldn’t be consoled over the telephone.

‘Here’ is the private hospital where Tony has been incarcerated for 21 years. He is desperately unhappy, and just over a month ago a whistleblower revealed to the BBC that Tony was ‘the loneliest man in the hospital’.

Support worker Phil Devine, who was at the secure Assessment and Treatment Unit there from 2015 to 2017, told of how this vulnerable adult, who has learning difficulties, autism and epilepsy, had only his basic needs met ‘like an animal’ and spent all his time in segregation.

‘He had never committed a crime, but here he was living in solitary confinement,’ he told BBC News. ‘He was fed, watered and cleaned. If anything happened beyond that, wonderful; but if it didn’t, then it was still OK.’

. . . Tony is one of more than 100 people with learning disabilities who have been held in specialist hospitals for 20 years or more. His case was highlighted in our sister paper the Mail On Sunday’s campaign against abusive detention of people with autism and learning difficulties, which exposed long-term use of solitary confinement, forced sedation and feeding through hatches.” 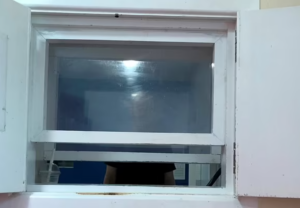