I used to think therapy could be beneficial if only you went through the trials of finding a good therapist—and by “good,” I mean one that is not only well-trained/well-educated, but one that is a “good fit” for you in particular. There are no easy ways to find such a “fit,” of course; it all has to be trial and error. Poking around on the Internet and making the most of the shockingly little third-party information that’s out there about therapists. Making an appointment for either a phone or video consultation (remember those days when stuff used to be in person?) that would give you anywhere from 15 to 50 minutes to get to know the therapist in whatever way less than an hour allows you to get to know anyone. Signing up for weekly sessions, sharing what you know about why you’re so messed up and allowing them to invalidate, gaslight and question you (but call it “challenging” you). Repeating the process and comparing your notes from different providers.

While all of this felt like approaching strangers simply because they had certain letters after their name, pointing to your deepest wound and waiting to see how they would respond while hoping for the best, what I didn’t ever question was the process itself or if I really needed to do it at all. 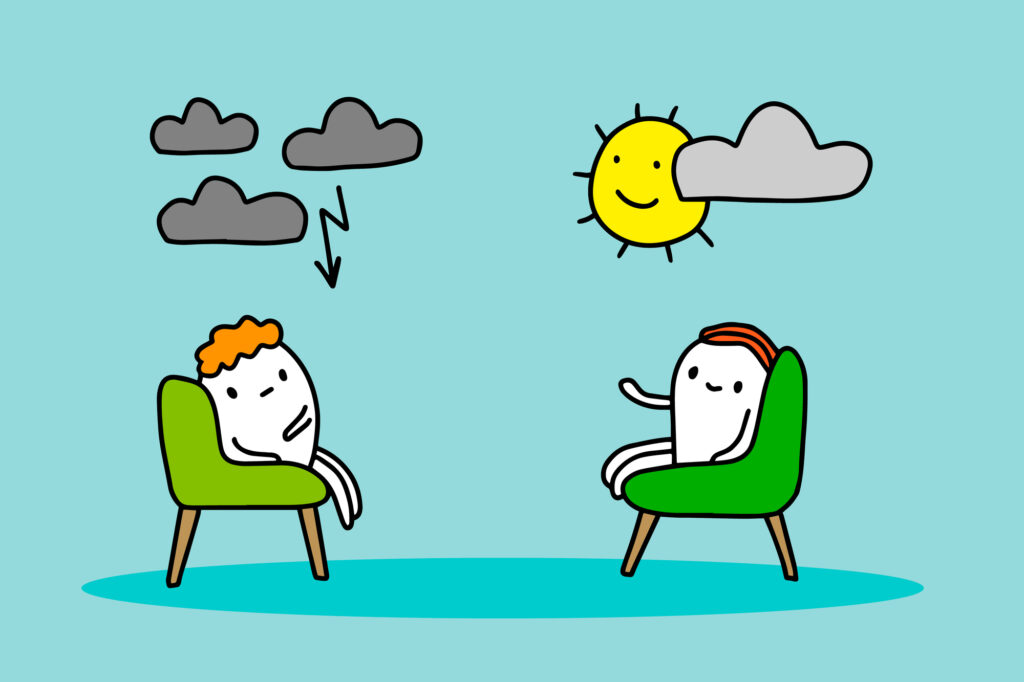 To be fair to myself, society doesn’t really present many other options for people experiencing mental and emotional distress. The psychology industry has so seeped into our lives that they’ve trained most people to encourage someone in pain to “seek help” from a “professional” and to maybe even suggest medication. Every once in a while (though I thankfully haven’t seen this lately), a well-meaning mental health “advocate” will post the number to the National Suicide Hotline on their Facebook profile with a reminder that “you are not alone,” clearly having done zero research into the many harms of the hotline. Otherwise, that’s about it that I know of in terms of “supports” for those in distress. So it’s not all that surprising that I wouldn’t have questioned seeking therapy itself.

Still, the best-case scenario is that the therapist validates your wound and asks you how you feel about it over and over again until you “understand” and can “integrate” that pain into your life. I’m not saying it’s categorically a bad thing to ask people how they feel—I often feel very differently than what others might guess from just knowing my circumstances. But I’ve never actually felt better after “naming” or “observing” my pain or whatever therapists are calling it these days. Those things don’t actually make pain go away if the source of the pain still persists.

Unless you all know of a therapist who claims and can back it up with actual client experiences that they themselves can permanently relieve the psychological pain you take to them by talking about it or “neutrally observing it,” it seems like this is a long-haul situation: if you’re still in pain, it must because there is more to uncover from your childhood. Let’s knife around in the wound from current circumstances (like housing insecurity, discrimination at work, social trauma, or any number of other legitimate external conditions that cause actual damage regardless of how good of a childhood you had) for whatever limiting belief or story you’re telling yourself as a result of some mysterious experience you had as a child that caused you to have such damaging beliefs.

Then let’s talk about that story over and over until it somehow dislodges—because that’s what things we repeat do, they go away on their own!—and you’re free to experience the oppression of real-time circumstances with the freedom of the “observer.” (As an aside, I’m not sure how encouraging clients to “step back” from their situation far enough to be able to see it from a “neutral” place, if that’s even possible, is really all that different from the “dissociation” the same profession claims is a “symptom” of a “disorder,” but I guess contradictions are only real for the peasants who have no power.)

Then, if you’re still in pain, let’s hypothesize that there’s actually a totally different wound that’s been infected with stories you made up as a kid to deal with whatever you experienced in childhood. Only once did a therapist tell me that nothing was wrong with me—and not only did they never validate that what was wrong was the shitty choice between staying in an abusive marriage or subjecting myself to the recurring brutalities of single-womanhood, they also told me that they thought it “was in my best interest” to keep seeing them after I’d started wondering why I wasn’t getting better and perhaps this wasn’t a good fit anymore.

It took the explosive ending of the five-year relationship I had with that therapist for me to realize that the reason it wasn’t a good fit anymore is because therapy isn’t a good fit. I can only speak for myself (and maybe for the increasing amount of people who have told me about their at best not helpful and at worst deeply injuring experiences with therapy/therapists), but I wish I had realized sooner what it took me months to recognize after the blowup with my therapist that ended our relationship, when I was still struggling with whether I should find another therapist—and actually feeling guilty that I hadn’t “yet.” This is how much power the psychology industry has taken from us: I had an extremely painful ending to a five-year relationship from which I thought I was receiving emotional healing and to which I kept showing up because I thought that this was the path that led to the mental wellness, self-confidence and life I wanted in general.

As I used the time I had been spending at therapy to reflect on what exactly I got out of it, I realized that, though I showed up weekly—for over two years, it was twice weekly, I was that convinced I was that messed up and my therapist helped themselves to my delusion and did not bother to “challenge” or “question” it at all—to something that claimed to be “therapeutic,” it didn’t even touch some of my deepest issues I believed were keeping me from the life and relationships I wanted. Not only that, it actively harmed me and undermined my ability to trust myself, validate my own emotions like an adult and develop the skill of not taking things personally.

It actively harmed me in that it made me dependent on another human for “reality checks” and ratification of my emotions. It actively harmed in the way that it ended—though I have never had a wholesome conclusion to a therapeutic relationship, the way this one ended was the worst yet. I was challenging my therapist’s assertion that they were able to help me and that it was in my best interest to continue, they interrupted, I raised my voice to cut them off to finish what I had started saying first and they interrupted me again to shout, “I have worked hard for you for five years” as the introduction to what would have been a major guilt trip had I let it. I did not: for the first time in my life, I was the one who abruptly ended a relationship, by clicking the “end meeting” button in the middle of whatever the therapist was saying.

Not even after all of that was I sure the relationship was officially over. It took me two days to send the email stating the obvious: your behavior was completely inappropriate. Please take me off your schedule permanently and do not contact me again. I felt guilty for not being in therapy for months after that—didn’t I still clearly need it after how I behaved with that therapist? Didn’t my inability to handle conflict and unwillingness to give someone a second chance indicate just how dire my psychological straits were?

What was actually going on was that I had an abusive relationship with and thus a trauma bond to therapy. That’s why I didn’t stop after my first therapist canceled on me with less than 24 hours’ notice and simply never reached out to reschedule. That’s why I continued despite the accusations and incompetence and projection of my former marriage therapist. That’s why I persisted for five years with a therapist who kept telling me we “would get to” my concerns about self-confidence or my perceived inability to stop the story playing in my head every waking moment that goes, “I’m inferior to everyone for every reason” despite knowing how illogical and damaging and self-injurious that story is. That’s why it’s taken me over six months to write about this, and that’s why this is the first time I’m saying anything in detail about it at all: to you, strangers on the internet who could leave a mean comment without a second thought.

It also actively harmed me in that it diverted my resources toward something ultimately useless for me, and away from what would have greatly benefited me, especially as a single/divorced low-income woman living in a very expensive city that’s exploding with homelessness. I spent over $6,000 on copays over the past five years. Yes, if you save $25 a week instead of paying someone to (not really) listen to you, you’d have somewhere between half to a full emergency fund. It’s probably closer to $8,000 since there were about two years there where I was attending therapy twice a week, working my butt off to save my marriage since neither my individual or my marriage counselor bothered to inform me that actually, it’s rarely 100% one person’s fault when a marriage falls apart and the cases where it is involve much more horrific behavior than anything I was putting my ex through. From my vantage point, over a year out from being officially divorced and over half a year out from finally ending the other abusive relationship I was in (the one with my therapist), I can say that financial fitness beats psychotherapy in terms of mental health benefits any damn day.

Of course, I can’t make generalities. I’m sure someone can come up with a really good reason why I’m wrong or a specific experience they personally had where psychotherapy was more effective for mental health than financial wellness. For me, though, I wish I hadn’t traded my Tuesdays (and for a while there, also my Fridays) for the peace of mind that comes with a financial cushion, however small it may be. I wish I hadn’t spent so many years gaslighting myself into believing that my real problem was buried beliefs from my childhood experiences rather than active, present-day harm.

An Open Letter to Howard Stern, the “Poster Boy for Psychotherapy”