From the New York Post: “A psychiatrist who treated his friends’ son for 20 years soured the man’s relationship with his parents and ruined his inheritance, a new lawsuit charges.

Ronald Broden began seeing Dr. Boris Rubinstein, a Westchester County child psychiatrist, in 1999 when he was 36 to treat depression. Rubinstein and Broden’s mother grew up together in Mexico, and the doctor socialized with Broden’s father, according to the $1 million suit filed in November in federal court in Manhattan.

Broden, 58, claims he felt he wasn’t gaining any benefit from the sessions but continued them until 2019 because ‘he did not want to offend his family friend,’ legal papers say.

During Broden’s years of treatment, Rubinstein would have monthly meals with Broden’s father — also a psychiatrist — and share ‘highly personal details’ about the son’s treatment, he claims in court papers. Broden said he never gave consent for such disclosure.

. . . Broden began posting negative online reviews about the psychiatrist, prompting the doctor to visit Broden’s parents and share with them private emails from their son . . . He shared the information to get the parents to pressure Broden to take down the negative reviews, legal papers say.

Instead, the already-strained relationship between Broden and his elderly mother was ‘completely ruined’ and she said her son’s inheritance would be reduced by $700,000, according to court papers.

. . .In general, there is no absolute prohibition against psychiatrists treating people they know, said Dr. Rebecca Brendel, president-elect of the American Psychiatric Association. 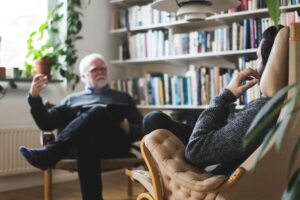