From Waking Times/Steve Taylor: Spirituality and Psychology: “If you asked them what life was like in prehistoric times, most people would conjure up an image like the famous opening scenes of 2001: Space Odyssey – groups of hairy savages grunting and jumping around, foaming at the mouth with aggression as they bash each over the heads with sticks.

We take it for granted that life was much harder then, a battle to survive, with everyone competing to find food, struggling against the elements, men fighting over women, and everyone dying young from disease or malnutrition.

A whole branch of ‘science’ has grown up around this view of the human race’s early history. This is relatively new discipline of evolutionary psychology, which tries to explain all of the negative sides of human nature as ‘adaptations’ which early people developed because they had some survival value. Evolutionary psychologists explain traits like selfishness and aggression in these terms. Life was such a struggle that only the most selfish and aggressive people survived and passed on their genes. The people with gentle and peaceful genes would have died out, simply because they would have lost out in the survival battle. Evolutionary psychologists see racism and war as ‘natural’ too. It’s inevitable that different human groups should be hostile to one another, because once upon a time we were all living on the edge of starvation and fighting over limited resources. Any tendency to show sympathy for other groups would have reduced our own group’s survival chances.

But fortunately we don’t have to believe any of this crude nonsense. There is now a massive amount of archaeological and anthropological evidence which suggests that this view of the human race’s past is completely false. Life for prehistoric human beings was far less bleak than we might imagine.

Take the view that life was a ‘struggle to survive.’ The evidence suggests that the lives of prehistoric human beings were a lot easier than those of the agricultural peoples who came after them. Until around 8000 BCE, all human beings lived as hunter-gatherers. They survived by hunting wild animals (the men’s job) and foraging for wild plants, nuts, fruit and vegetables (the women’s job). When anthropologists began to look at how contemporary hunter-gatherers use their time, they were surprised to find that they only spent 12 to 20 hours per week searching for food – between a third and a half of the average modern working week! Because of this, the anthropologist Marshall Sahlins called hunter-gatherers the ‘original affluent society.’ As he noted in his famous paper of that name, for hunter-gatherers, ‘The food quest is so successful that half the time the people do not seem to know what to do with themselves.’

. . . The transition from a nomadic hunter-gatherer way of life to a settled agricultural one began in the Middle East at around 8000 BCE, spreading into Europe and Asia over the following millennia (and developing independently in some places). Many of the world’s cultures have myths that refer to an earlier time when life was much easier, and human beings were less materialistic and lived in harmony with nature and each other. In ancient Greece and Rome this was known as the Golden Age; in China it was the Age of Perfect Virtue, in India it was the Krita Yuga (Perfect Age); while the Judeo-Christian tradition has the story of the garden of Eden. These myths tell us that, either as a result of a long degeneration or a sudden and dramatic ‘Fall,’ something ‘went wrong.’ Life became much more difficult and full of suffering, and human nature became more corrupt. In Taoist terms, whereas the earliest human beings followed the Way of Heaven and were a part of the natural harmony of the universe, later human beings became separated from the Tao, and became selfish and calculating.

Many of these myths make clear references to the hunter-gatherer way of life – for example, the Greek historian Hesiod states that during the Golden Age ‘the fruitful earth bore [human beings] abundant fruit without stint,’ while the early Indian text the Vaya Purana states that early human beings ‘frequented the mountains and seas, and did not dwell in houses’ (i.e. they lived a non-sedentary way of life). The garden of Eden story suggests this too. Originally Adam and Eve ate the fruit from the tree of knowledge, until they were forced to leave the garden and forced to ‘work hard and sweat to make the soil produce anything.’ It appears that, at least in part, these myths are a kind of ‘folk memory’ of the pre-agricultural way of life. The agricultural peoples who worked harder and longer, had shorter life spans and suffered from a lot more health problems must have looked at the old hunter-gatherer way of life as a kind of paradise.

There are other significant reasons why these peoples would have seen earlier times as a Golden Age. There is a great deal of evidence suggesting that prehistoric human beings were much less war-like than later peoples. Archaeological studies throughout the world have found hardly any evidence of warfare during the whole of the hunter-gatherer phase of history . . .

. . . In prehistoric societies there were no status differences between individuals either. There were no different classes or castes, with people who had more power and possessions than others . . . Almost all contemporary hunter-gatherers show a striking absence of any of the characteristics that we associate with social inequality. The anthropologist James Woodburn speaks of the ‘profound egalitarianism’ of immediate-return foraging peoples and emphasises that no other way of human life ‘permits so great an emphasis on equality.’ Foraging peoples are also strikingly democratic . . .

All of this strongly argues against the idea that prehistoric human beings were brutes whose only concern was survival, and whose lives were full of cruelty and conflict, as men competed against each other for status and food and sex.

Warfare, social oppression and male domination – and an existence that was ‘nasty, brutish and short’ – belong to a later phase of human history. Evidence from artwork, cemeteries and battle sites suggests that there was an ‘eruption’ of these social pathologies during the 4th millennium BCE, starting in the Middle East and central Asia. The root cause of this change seems to have been environmental . . .

This environmental disaster seems to have changed the psyche of these peoples. Whereas before they had been peaceful and egalitarian, now they became aggressive, hierarchical and patriarchal. Over the following centuries, they spread over Europe, the Middle East and Asia, killing and conquering the peaceful ‘Old World’ peoples they came across, including the civilisation of Old Europe (which was reconstructed by the archaeologist Marija Gimbutas). By 500 BCE, these peoples had more or less completely conquered the whole of Eurasia, leaving only a few indigenous peoples such as the Laplanders of Scandinavia, the tribal peoples of Siberia, and the indigenous peoples of the forests and hills of India. In mainland Europe the only surviving non-Indo-European indigenous peoples were the Basque people of northern Spain (who amazingly still survive today) and the Etruscans of Italy, who were soon to be wiped out by the Romans.

In my book The Fall: The Evidence for a Golden Age, 6,000 Years of Insanity, and the Dawning of a New Era, I try to explain how these people were (and are) different from the peaceful peoples who came before them. My theory is that the environmental catastrophe (the drying up of their fertile lands) caused an ‘Ego Explosion.’ These peoples developed a stronger and sharper sense of identity, or of individuality, which made them feel more separate from nature and from other people, and more liable to be aggressive and to lust after power and status. We – modern day Eurasians – are the descendants of these peoples, and we have inherited their strong sense of ego. This is still the main difference between us and indigenous ‘unfallen’ peoples such as the Native Americans, Australian Aborigines and the peoples of Oceania, and the reason why they have much more respectful attitude to nature than us, and a more spiritual vision of the universe. Our strong sense of ego ‘walls us off’ from other people and nature, makes us unable to sense the alive-ness of the world around us, and may ultimately be responsible for our extinction as a species.

However, there are some signs that, as a culture, we are slowly transcending the ‘fallen’ psyche, and going beyond our ego-separateness. Over the last three hundred years or so, there has been a new spirit of empathy growing, which has led to less cruel treatment of children and animals, less severe punishments for criminals, the women’s movement, the abolition of slavery, the socialist movement, a new respect for nature, a more open and healthy attitude to sex and the human body and so on. And there has been a new sense of the sacred and of the possibility of self-transcendence, which has led to a massive upsurge of interest in esoteric/spiritual philosophies and practices like paganism, shamanism, Buddhism, meditation and so on. There are signs that we are reconnecting with nature, regaining our sense of the aliveness of the world and of the hidden mysteries of the cosmos. The characteristics of the prehistoric golden age may be slowly re-emerging. The only question is whether there is enough time left for these characteristics to emerge fully, before the old ‘fallen’ psyche leads us to self-destruction.

The idea that human history is a gradual but continual progression – starting from a state of savagery, with generations slowly making technological and social advances and passing these down, and leading to the pinnacle of western European civilisation – is a leftover from the Victorian era, part of the same colonial mentality which saw ‘primitive’ indigenous peoples as subhumans who could be justifiably conquered and killed. Rather than a progression, the last 6,000 years of war, oppression, misery and hardship are the result of a painful degeneration from an earlier, healthier state. We may finally be moving forward now – but only in the sense of turning a full circle, and rekindling glimmers of ancient harmony.” 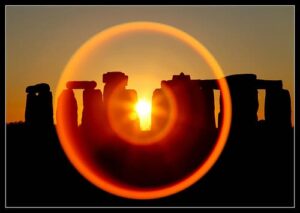