From The New Statesman: “Adam Rutherford, [in Control: The Dark History and Troubling Present of Eugenics], writes that ‘though wildly popular across political divides…plenty of people vocally and publicly opposed the principles and the enactment of eugenics policies in the UK and abroad’. This may be so, but very few of the active opponents of eugenics were progressive thinkers. During the high tide of eugenic ideas between the start of the 20th century and the 1930s, no leading secular intellectual produced anything comparable to Chesterton’s Eugenics and Other Evils (1922), a powerful and witty polemic in which he argued for the worth of every human being.

. . . Awkwardly for today’s secular progressives, opposition to eugenics during its heyday in the West came almost exclusively from religious sources, particularly the Catholic Church . . . For the secular intelligentsia in the first three decades of the last century, eugenics – ‘the deliberate crafting of a society… by biological design’, as Rutherford defines it – was a necessary part of any programme of human betterment . . .

The discovery that six million European Jews were murdered in the Holocaust, along with hundreds of thousands of people with physical disabilities, mental illnesses or other characteristics – such as simply being gay – that supposedly made their lives ‘unworthy of living’, was a rupture in history. Ideas and policies that had been regarded by an entire generation of thinkers as guides to improving the species were seen to be moral abominations. Eugenics had enabled an unparalleled crime. An earlier generation’s understanding of progress was not just revised. It was rejected, and something more like its opposite accepted.

This reversal should be unsettling for progressive thinkers today. How can they be sure that their current understanding will not also be found wanting? Rutherford, who shares much of the prevailing progressive consensus, seems untroubled by this possibility. As he notes on several occasions, he writes chiefly as a scientist. He has little background in moral philosophy, and at times this shows.

. . . There is a direct line connecting early 20th-century eugenics with 21st-century transhumanism. The link is clearest in the eugenicist and ‘scientific humanist’ Julian Huxley (1887-1975) . . . in 1951 . . . he had coined the term ‘transhumanism’ to describe ‘the idea of humanity attempting to overcome its limitations and to arrive at fuller fruition’ . . . But . . . he illustrates a fundamental difficulty in both eugenics and transhumanism. Who decides what counts as a better kind of human being, and on what basis is the evaluation made?

. . . The fundamental ethical objection to eugenics is that it licenses some people to decide whether the lives of others are worth living. Part of an intellectual dynasty that included the Victorian uber-Darwinian TH Huxley and the novelist Aldous, Julian Huxley never doubted that an improved human species would match his own high-level brainpower. But not everyone thinks intellect is the most valuable human attribute. General de Gaulle’s daughter Anne had Down’s syndrome, and the famously undemonstrative soldier and Resistance leader referred to her as ‘my joy’, and when at the age of 20 she died he wept. The capacity to give and receive love may be more central to the good life than self-admiring cleverness.

. . . The likely upshot of transhumanism in practice – a world divided between a rich, smart, beautified few whose lifespans can be indefinitely extended, and a mass of unlovely, disposable, dying deplorables – seems to me a vision of hell. But it may well be what is in store for us, if the current progressive consensus turns out to be as transient as the one that preceded it.” 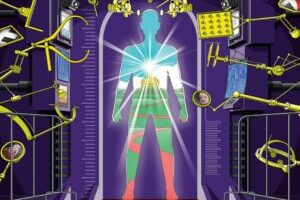