Two reviews of psychotherapist Chellis Glendinning’s 1994 book outline her holistic thesis about the common roots of our psychosocial and ecological crises.

From What Is Sustainable: “Chellis Glendinning grew up in Cleveland. Her father was a caring doctor [but] a brutal child abuser. She and her brother were raped, beaten, and tortured. Her pain was swept under the carpet by the magic of dissociation — a portion of her personality split off and became unconscious. Memories of her traumatic childhood were forgotten for 40 years. Amnesia allowed her to function in the world. She earned a PhD and became a psychotherapist.

One day, in a therapy session, her childhood traumas suddenly began to return to consciousness. Chellis was determined to fully understand them, resolve them, and recover a healthy state of wholeness. She wanted to heal herself 100 percent.

Understanding matters of great importance often requires the use of a powerful medicine called history. To know who we are, we must know where we came from. Trauma and pathology are almost the norm throughout today’s society. A daunting number of people are in therapy, or taking medication, or hobbled by untreated mental imbalances. These problems are frequently passed from generation to generation.

Chellis explored her family tree and discovered patterns of ancestors who were damaged by alcoholism or mental illness. She strongly suspected that her father had also been abused. She learned about her Puritan ancestors in colonial times. Reverend Thomas Hooker lived in what was to become Connecticut. On Sundays, he preached the sweet love of Jesus to the faithful, and then he spent the rest of the week as a bloody terrorist, determined to exterminate the diabolical Native American savages [sic].

Looking even deeper into the past, the trail of trauma kept unfolding. Prior to the invasion of America, Europe was also a realm of intense craziness. For 300 years the skies were darkened by the smoke of burning witches. Insane leaders routinely led their people into countless wars. The written history of Europe was insane from page one. By and by, Chellis came to comprehend that her father’s madness was just a wee speck of pathology in an enormous tsunami of pathology that spanned many centuries and regions.

Very importantly, she also came to comprehend that this torrent of pathology did not in any way represent the normal human condition. It was obvious that nature-based societies, like the Native Americans, inhabited a fundamentally different spiritual universe. They did not devour the land and leave wreckage in their wake. She could see that nature-based societies more closely represented balance and normality. They suffered little from mental illness. Their reverent relationship with the Earth was rooted in a million-year tradition — 35,000 generations of low-impact living.

It became clear that the madness of modern technological society could readily be traced back to a recent fork in the human journey that occurred about 10,000 years ago, just 300 generations back — the domestication of plants and animals. ‘This was the purposeful separation of human existence from the rest of life,’ and the fence was its symbol. It divided the world into two new realms: wild and tamed. This shattered the ancient wholeness, and replaced it with chronic traumatic stress.

The transition to domestication blindsided human societies. It was completely out of balance with our traditional, time-proven way of life — living with respect and reverence for the natural world. The new game was about owning and controlling nature. Eventually, these unlucky people forgot what it meant to be human beings, and they ended up living like fish out of water — flippity-floppity-flappity. Gasp! Gasp! Gasp! It was a temporary way of life with no future.

The last six generations have witnessed the horrific transition to industrial civilization. The nightmare shifted into fast-forward, and we are racing toward a future where nature has been erased by endless shopping enterprises, clear-cuts, crumbling pavement, rotting cities, eroded farms, toxic wastelands, and endless flocks of zombies entranced by glowing cell phones. Billions of traumatized people perceive this living death as being the normal human existence. It is no coincidence that our era of flourishing ecological annihilation is also an era of flourishing mental illness.

‘Well-being and wholeness depend on, and exist in constant and complex intimacy with, the well-being and wholeness of the Earth,’ according to Chellis. ‘It’s well past time for us to come home, to return to the matrix from which we came, to recover what we have lost, to remember again the wisdom and balance of the natural world.’ To explain this process, she sat down with a wooden pencil, and wrote a book called My Name Is Chellis & I’m in Recovery from Western Civilization.”

‘What Is Sustainable’ article→

From Spirituality & Practice: “In this paperback, psychotherapist and social activist Chellis Glendinning describes the tie between the rampant psychological dysfunction in our society and the ecological crisis in our world. Personal and political problems are intertwined and stem from the same root — our alienation and separation from the natural world. Glendinning’s eco-psychological perspective enables her to work a large canvas.

The author observes that hunter-gatherer societies, which she calls nature-based cultures, were built upon a close intimacy with the Earth. Indigenous people experienced a sense of belonging and security in their world. Life was centered in group processes and communal democracy. Relaxed lifestyles balanced work and leisure. And these indigenous peoples were able ‘to draw vision and meaning from unordinary states of consciousness.’ The daily practice of spirituality, healing, and ecological living grounded life.

The shift to agriculture, according to Glendinning, destroyed this primal matrix (‘the state of a healthy, wholly functioning psyche in full-bodied participation with a healthy, wholly functioning Earth’) and brought about original trauma (‘the disorientation we experience because we do not live in the natural world. It is the psychic displacement, the exile that is inherent in civilized life.’).

Glendinning believes that this homelessness has led to the self-destructive and addictive behavior of civilized existence. Post-modernism and the continued belief in the power of technology to rescue us has resulted in ever greater doses of environmental devastation.” 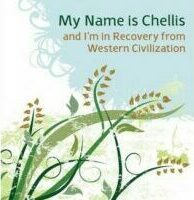