From The Conversation: “Pennhurst was a place of segregation, power, abuse, neglect and torture, fuelled by society’s perception that people with intellectual disability were a dangerous threat to social order.

At the dawn of the 19th century’s eugenics movement, people with intellectual disability existed on the lowest rung of the human hierarchy. Ultimately, they were removed from the human gene pool through institutionalisation and sterilisation.

In 1987, in response to the disability rights movement’s loud call for de-institutionalisation and after groundbreaking litigation brought by a resident and her family, the State of Pennsylvania closed Pennhurst’s doors. The courts agreed those in state care had a constitutional right to appropriate treatment and education. More than 1,000 Pennhurst residents began lives of worth and value in the community.

In 2010, the state of Pennsylvania sold the site. Today, Pennhurst exists as a ‘dark tourism’ destination. Pennhurst Asylum entertains visitors with ‘jump scares’ around a narrative of depraved criminality, that simultaneously erases and evokes the inhumane treatment of the people who called Pennhurst home.

. . . Pennhurst is one of many ‘haunted’ tourist attractions worldwide inspired by traumatised lives of people with disability.

. . . By relying on offensive and misguided portrayals of people with disability as horrifying, dangerous and criminal, operators exploit the ways residents were treated for commercialised entertainment.” 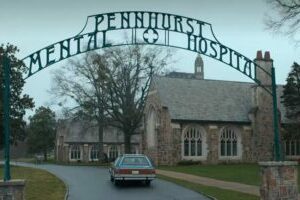