From the BBC: “Scots with learning disabilities and autism have been locked in secure hospitals and psychiatric wards for decades, a BBC investigation has found. They remain unable to get out despite Scottish ministers saying 22 years ago that they should be living independently in the community.

BBC Disclosure found one person with a learning disability who had been behind locked doors in hospital for 25 years. Another was cleared for release eight years ago but is still in hospital. Some families said their relatives had been left to rot. The Scottish government said the findings were unacceptable and that local services must do more to get people into their own homes.

. . . nine people with autism and learning disabilities are currently in Carstairs, a high security state psychiatric hospital in South Lanarkshire, which houses some of Scotland’s most serious criminal offenders. None of these patients with learning disabilities were convicted of a crime before they were sent there.

. . . Prof Andrew McDonnell, a clinical psychologist and professor of autism studies at Birmingham City University, said people with autism and learning disabilities can live safely in the community with the right level of support and expertise [and that] they should only ever be admitted to hospital for a matter of months. . . He said forcing those with sensory issues to conform to a noisy psychiatric ward often made people’s behaviour deteriorate.

. . . Dr Anne MacDonald, the Scottish government adviser on learning disabilities, said people being in hospital for 10 or 15 years was a ‘waste’ and it was ‘not a life.’ She said that people might think that the best place for people with complex support needs was in hospital but that was not the case. ‘It’s absolutely not acceptable that people are living in hospital when there’s no clinical reason for them to be there,’ she said.

. . . Fraser is one of about 300 people in Scotland with a learning disability or autism estimated to be living behind the locked doors of hospital wards. About 70 are recorded as delayed discharge. Many of them have been detained under the Mental Health Act.

Fraser’s mother Karen said that although he has been in hospital for a relatively short time she is terrified he is trapped there permanently. She said that when he went into hospital it was in his best interest to get him the help that he needed. ‘How wrong were we?’ she said.

Karen said Fraser had deteriorated physically and mentally over that time. ‘They’ve taken him on a massive journey on a cocktail of drugs,’ she said.” 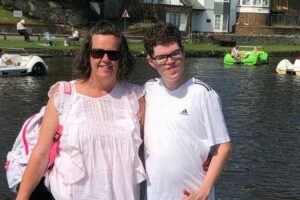