From The New York Times: “Every five years, top officials of the Food and Drug Administration go behind closed doors to negotiate the terms of its core budget — about $3 billion this year.

But the F.D.A. is not at the table with members of Congress or with White House officials. Instead, it’s in dozens of meetings with representatives of the giant pharmaceutical companies whose products the agency regulates. The negotiations are a piece of the ‘user fee’ program in which drug, device and biotech companies make payments to the agency partly to seek product approvals. The fees have soared since the program’s inception three decades ago and now make up nearly half of the F.D.A.’s budget, financing 6,500 jobs at the agency.

The pharmaceutical industry funding alone has become so dominant that last year it accounted for three-quarters — or $1.1 billion — of the agency’s drug division budget.

Details of the program are being debated in Congress, which faces a deadline of Sept. 30 to approve legislation that would reauthorize the agency’s power to collect the fees . . .

‘It’s kind of like a devil’s bargain,’ said Dr. Joseph Ross, a professor at the Yale School of Medicine who has studied F.D.A. policies, ‘that I think is not in the best interest of the agency, because it turns this every-five-year cycle into the F.D.A. essentially asking industry, “What can we do to secure this money?”’

‘So the industry, in a sense, is regulating itself,’ [said Vermont Senator Bernie Sanders] during a hearing on June 14 of the Senate Health, Education, Labor & Pensions Committee.” 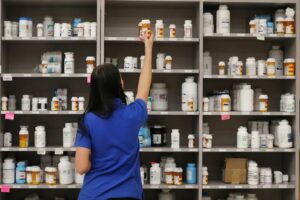