From Resilience/Jeremy Lent: “Some of the leading thinkers of our time are unleashing a stream of warnings about the threat of artificial intelligence taking over from humans. Earlier this month (Dec. 2017), Stephen Hawking predicted it could be ‘the worst event in the history of our civilization’ unless we find a way to control its development. Billionaire Elon Musk has formed a company to try to keep humans one step ahead of what he sees as an existential AI threat.

The scenario that terrifies them is that . . . we might create a force more powerful than all of humanity with a value system that doesn’t necessarily incorporate human welfare. Once it reaches a critical mass, this force could take over the world, control human activity, and essentially suck all life out of the earth while it optimizes for its own ends. Prominent futurist Nick Bostrom gives an example of a superintelligence designed with the goal of manufacturing paperclips that transforms the entire earth into one gigantic paperclip manufacturing facility.

These futurists are right to voice their concerns, but they’re missing the fact that humans have already created a force that is well on its way to devouring both humanity and the earth in just the way they fear. It’s called the Corporation.” 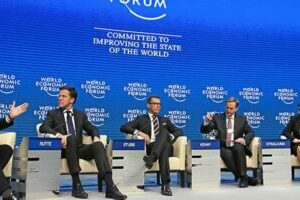