From The Washington Post: “Imagine a child with a disability, unable to communicate needs, wants or fears. In frustration or fright, that child might overturn a desk or throw a book. Now, imagine a teacher secluding that child in a dark closet or pinning that child to the floor.

This year, thousands of U.S. schools are using these barbaric ‘restraint and seclusion’ practices as go-to strategies to punish or segregate students with disabilities. Yet these techniques don’t resolve problematic or dangerous behaviors — they make things worse, escalating behaviors and potentially causing physical harm to children, emotional damage or even death.

‘Restraint’ refers to physical force or the use of a device such as ties or straps to hold a child down. ‘Seclusion’ involves forced isolation — solitary confinement in a closed spaced such as a soundproof, padded room or a closet where an unsupervised child having a meltdown could be seriously injured.

I have a daughter with autism. When I first heard about this practice, I thought it must be rare. But it is shockingly common, having been used against tens of thousands of U.S. students in recent years.

In Michigan alone, where my family resides, restraint and seclusion was used in schools more than 94,000 times from 2017 to 2022. Because there are no penalties issued to schools for failing to report, this number is undoubtedly an undercount. An Education Department analysis covering the 2017-2018 school year (based on self-reporting) showed that more than 100,000 children across the United States had been subjected to these inhumane practices.

Each use of restraint and seclusion diminishes the future of any child subjected to it. Put yourself in the child’s shoes: What if you went five days a week to a school that regularly locked you up or physically held you down? Most of us would walk in ready for a fight, not to learn.” 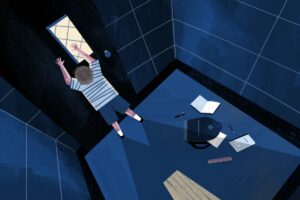