“Creating Our Mental Health”: Welcome to a conversation between two social therapists who meet regularly to share and advance our therapeutic work. We hope these dialogues can support and stimulate others who are integrating developmental conversations into their therapeutic practices and personal growth. See the first post in the series for a brief explanation of what social therapy is and the perspectives we’re coming from in our dialogues.

On May 19, one of us (Ann) was walking on a busy street corner in New York City, when she was randomly assaulted by someone who walked up behind her, punched her to the ground, and ran off. She became the latest random target of a phenomenon dubbed by NYC law enforcement as “the knock-out game.” Passersby pitched-in to help, called the ambulance and chased the assailant. Ann underwent surgery for a broken hip and hunkered down for a long-term recovery.

We want to share conversations we had coming out of these events in the hopes it might help others explore how to keep growing emotionally in an uncertain and sometimes violent world. 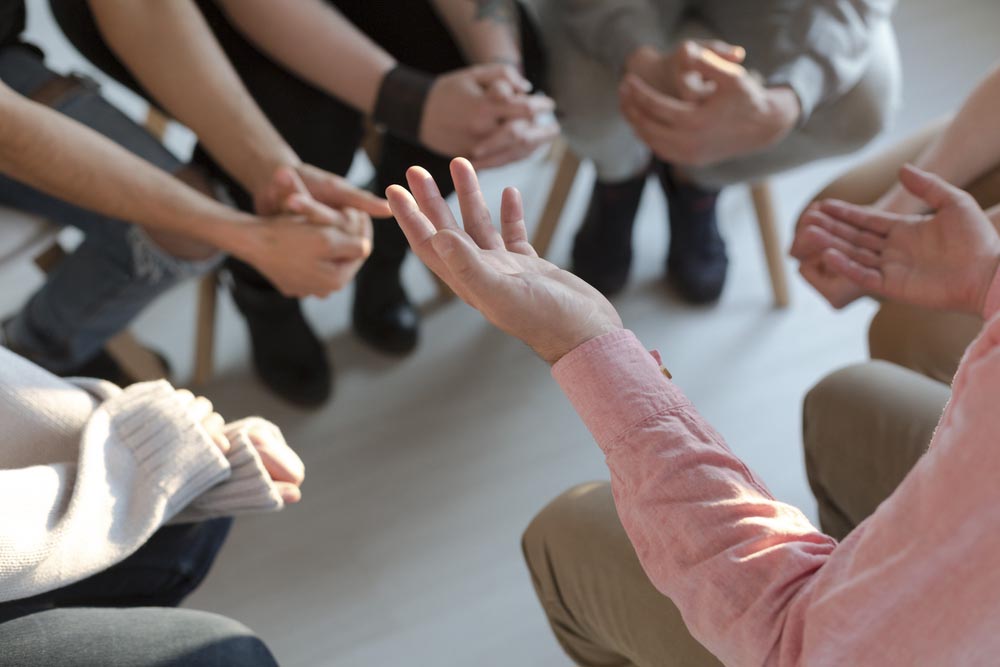 Hugh: Ann, throughout this ordeal, you’ve been so upbeat and cheerful, despite being in pain and mostly confined to bed. I wanted to ask you how you’ve managed to be positive in the face of this random attack. I think yours is an unusual response. Let’s unpack it.

Ann: Thanks, Hugh. I’m touched by your question. I’m aware that these things are happening all over the world. I’m as susceptible as anyone else to random attack—they are happening to more and more people. I don’t subscribe to the philosophy that “everything (even really bad things) happens for a reason,” or (conversely) that somehow I’m in a protected class. These are uncertain times, many institutions are crumbling and chaos is often what we have to deal with. We’re all subject to getting attacked or hit by a car or whatever. So I think that helps me not to take things overly personally, and that can be very grounding.

Ann: Yes, and that sets us up to take everything that happens personally. I didn’t and still don’t feel angry at my attacker. I don’t know much about who he is—just that he is 24 years old, and presumably pretty desperate and angry. He could not do anything constructive with that rage, and we see that happening more often as people are desperate in their lives. So I didn’t feel that the attack was personal—it’s OF the world.

Hugh: Wow! I think you’re so right about all of that. But it’s an unusual response, to say the least. Most people do take it personally when something terrible happens to them.

Just to let you know, I was also particularly concerned about how this would impact you given your age.

Ann: Yes, I’m 75. And yes, just because I didn’t get into blaming or relating to myself as the ultimate victim, it was hard to stay on track emotionally, given that I am older and you just don’t rebound after serious injury. Not easy!

Right after this attack, I went through a period where I thought that this was the beginning of my demise—my health would continue to go downhill, and so I was finished! I felt overwhelmed and discouraged. I talked about it with friends and in my therapy group.  They were upset, frightened, sad and so eager to be with me in going through this. It was deeply touching to me.

Hugh: Could you say more, if you’re willing, about that work and how it impacted on you emotionally?

Ann: Sharing my response to the attack helped our group and me explore other very painful life experiences as a Jewish women that I’d had a tendency to minimize. I told them about my painful childhood living in an Austrian refugee camp with my parents who had survived the Holocaust in Eastern Europe.

People in the group were deeply responsive and urged that I not minimize the emotional impact of these kinds of painful life experiences.

Hugh: And how was that process of opening up for you?

Ann: It was petrifying and wonderful at the same time. We discovered that others who had been through violent experiences, including one man who had been held at gunpoint with his young daughter, dealt with the experience by saying to himself, “It could have been worse; we were lucky,” and feeling that he didn’t have the right to be that upset. This was important to me. That we could experience terrible violence without making it “personal,” or blaming the perpetrator, etc. while still letting it land emotionally.

Hugh: How do you think that has been helpful?

Ann: It’s allowed me to have more compassion for myself and others who go through these kinds of events.

Ann: I think it’s depersonalizing and personalizing at the same time. You’re a particular person with these other particular people, many of whom have had experiences that are similar though not the same. So there’s a connection there, but it’s also the case that my experience is very particular to me. And to have people want to get to know me in that very intimate way is incredibly moving to me.

Hugh: That’s very touching to me and wonderful to hear.

Was there an element of you choosing how you were going to respond to the attack?

Ann: It’s a good question. I was doing certain things in my life before this happened. I decided I’m going to continue my life and I’m going out to meet people on my walker. I continued doing therapy. I let my clients in on what’s been happening with me and they’ve been great. I also started swimming. So, I’ve been living my life, rather than preparing for my decline which is what I was initially inclined and tempted to do.

Hugh: You are all those things—special and particular. But at the same time, you’re not a superwoman, you’re an ordinary person who chose how you were going to live your life after this attack.

It’s inspiring when someone does that right before your eyes. People think, “I couldn’t possibly do that!” Well, maybe you could!! You can perform certain activities that produce certain outcomes.

All of us can choose how we’re going to live our lives, moment to moment. We can keep changing how we live our lives. And I also think it’s miraculous and magical that we can do that. We live in a world where you’re supposed to do things in certain “normal” ways, and it’s so constricting. When people choose to do things differently, it’s powerful and magical.  Things that seem impossible can happen.

Ann: Yes, it’s hard to make developmental choices when things are so painful.

It’s a very emotional choice. I cried a lot. The emotionality doesn’t go away, the sadness, the fear. I’m 75, I have a broken femur, may need a hip replacement. It’s been one health difficulty after the other, and I’m waiting for the next shoe to fall. The streets are less safe, but it’s not going to stop me.