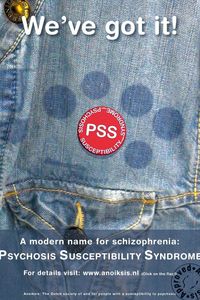 Bill George was born in England and emigrated to the Netherlands in 1975. He worked for a Dutch academic publishing house despite his diagnosis of schizophrenia (PSS). He took early retirement in 1998 and devoted himself to freelance work and later to the Dutch patient society Anoiksis as a volunteer. He is currently Anoiksis Foreign Affairs co-coordinator together with Aadt Klijn. Contact: [email protected]

Aadt Klijn studied (clinical) psychology at the University of Utrecht. He did not finish it because he became ill. Now he is working in a greengrocers in the grounds of a psychiatric hospital. Besides that, he is a regional coordinator of Anoiksis and writes articles together with Bill George about a new name for schizophrenia.