In a couple of weeks – on 20 March – it will be five years since my beautiful son killed himself.  After fighting for justice and accountability and for a change in the way we conceptualise and approach suicide prevention for the first two years after his death, I came to understand that rather than doing this as an individual I needed to build a worldwide network of the suicide bereaved to accomplish the task – to build a group of people who wanted their children and other family members to be remembered as pioneers in suicide prevention, not just people who killed themselves.

In August 2010, my friend and fellow ‘suicide mum’ Deb Williams and I established CASPER – Community Action on Suicide Prevention Education & Research.  CASPER’s goals are to provide peer support to families bereaved by suicide, to educate politicians and opinion leaders on suicide and its prevention and to support families and communities to reclaim suicide prevention from medical professionals and governments.

CASPER is a registered charity and was initially funded by the sale of my home and other assets and run on the voluntary labour of people who had lost loved ones to suicide. We had almost no money but refused to let that get in the way of doing what needed to be done. When you know a child may die if you don’t do something, you find a way of doing it. It really is as simple as that.  I smile when I think of the things we did – getting free paint test pots and painting Deb’s old horse float with suicide prevention messages and driving around the streets to advertise our community education sessions, driving around the country in an unregistered vehicle with a tent in the back in the middle of winter running free workshops and building our own website from scratch using instructions from google.

I graduated with an MBA five weeks after Toran died and during my study had developed an interest in models of partnership between business and non-profits which were profitable for business and grew the work of charities.

From the beginning, CASPER made a commitment to not seeking or accepting government funding. This was important to us for three reasons. First, as a watchdog on government it was critical we maintain financial independence. Second we wanted to work collaboratively with other organisations and being in competition with them for funding was not going to facilitate that.  Third we wanted business and other sectors of the community to see themselves as integral to suicide prevention and step up to play their role rather than considering that paying their taxes was the beginning and end of their responsibility to suicide prevention.

My business degree and experience as a CEO positioned me well to both produce a good case to business leaders that investing in CASPER was a sound financial decision and to engage with business leaders. A leading New Zealand entrepreneur, Mike Pero who came on board as CASPER’s principal sponsor (at the time when my life savings and the proceeds of the sale of my house was gone and we had $386 in the bank!) was the key to getting us an audience with some of our countries top business people.

My argument was simple. Communities where suicide rates are low are good for business. Dead people and families and communities traumatised by suicide do not spend money on goods and services. Communities where business is flourishing produce jobs, higher incomes, good housing  and funding for social services and recreational facilities. There is a synergy that creates a win/win situation for business and non-profits who work together. Strong healthy communities support business profitability while strong healthy businesses support communities that protect against suicide.

Suicide costs $1.6 billion against the NZ economy per annum. Two hundred thousand of this is in lost productivity. The financial benefits to business of reductions in suicide rates can be quantified and financial and other resources invested in effective suicide prevention programmes can presented to shareholders as profit generating activity. Last year, CASPER received $90,000 in donations from business and far more in the donation of goods and business services including marketing, legal services, accounting and auditing services and PR.

The media was another key CASPER target. Our goal was to establish ourselves as the ‘go to’ agency for the media on stories about suicide. Rather than all comment on the subject being provided by mental health providers and pharma influenced researchers, we wanted those who have lived experience of suicide to become visible and thinking from disciplines other than psychiatry to be presented to the public. Our blend of credible research and personal stories makes good copy and it is now rare for the New Zealand media to do a story on suicide without seeking comment from CASPER.

On the front line, CASPER began connecting with families and communities. We travelled the country running free community education sessions in which we presented data on suicide in NZ, evidence that our current mental health approach to suicide is not working and research on effective suicide prevention using sociological and indigenous models of suicide prevention. We told families and communities what we who have lost our children to suicide know now, that we wish we had known before they died.

Using research and experience we produced the following two models – one showing what causes suicide and the other what an environment that protects against suicide would look like. 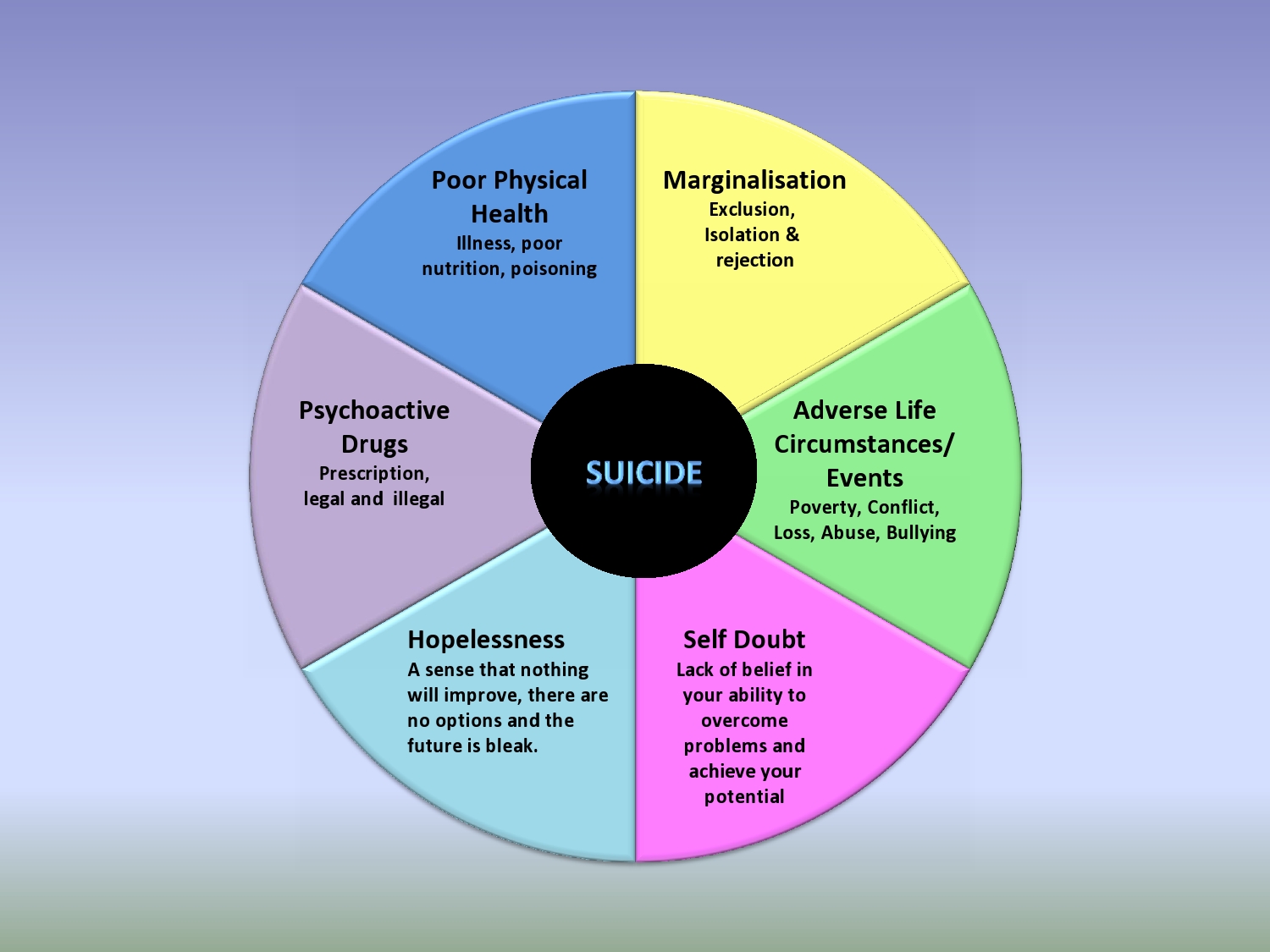 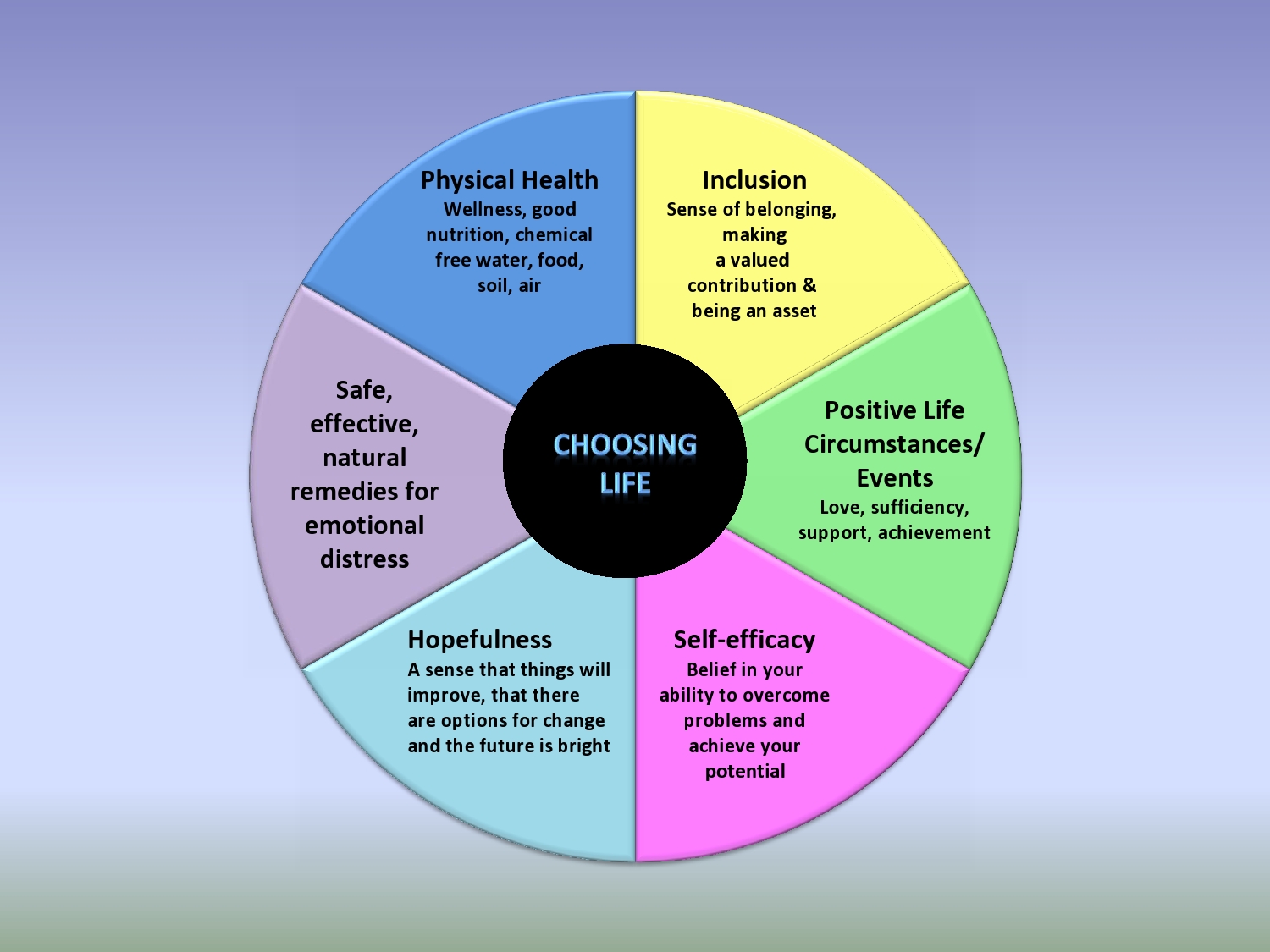 We worked with families and communities to audit themselves and identify where they needed to target their suicide prevention activities but also promoted the idea that suicide prevention, rather than being an activity or a programme is a way of living with and relating to others. It is about kindness, compassion and concern. It is about suspending judgement and offering support. It is about valuing everyone in your family and community and letting them know you value them. It is about making sure that everyone has a sense that they belong. Simple really and no white coat or prescription pad required.

And we were there for bereaved families. Not as counselors or service providers but as human beings who had shared the nightmare of suicide and would never expose them to judgement or rejection but be there in whatever capacity they needed. We match the families who contact us with families who have lost the same family member, whose dead loved one is a similar age, gender and ethnicity and who died by the same method. Our volunteers are trained to assist families in making decisions about autopsies and toxicology testing, to help deal with police investigations, to support families to prepare their cases for inquests and other enquiries and to provide practical help. Shopping, supervising childrens homework, making meals – whatever they need. We also of course provide an opportunity for people to become involved in suicide prevention – to give their loved one a legacy and to give themselves a reason to carry on living.

We also support families who have not experienced suicide loss but who are dealing with the suicidality of a loved one and are scared they may join our group.

We run a sibling network for children who have lost brothers, sisters or close friends to suicide.

We meet with politicians and government official and medical/mental health professionals but frankly, we don’t put a huge amount of effort into changing the views of these people. We believe our efforts are better directed to creating a model of suicide prevention that is so superior to the current model, that mental health clinics and antidepressants become obsolete. We believe that educating the community so that voters ask the right questions of their elected representatives and see suicide prevention as a key election issue is the path to change in government policy. We do however provide a voice for the 65,000 New Zealand families bereaved by suicide when legislation and policy are being developed that impact suicide and the families it affects.

We work hard. It is physically and emotionally draining work. But it is the job our children left us with and we are their mothers and fathers. This is how we continue to parent our children after their deaths and none of us can imagine doing anything else.