In these days of sequestrations, budget cliffs, and congressional gridlock, everyone is feeling pressured to cut back, cut corners and find the most inexpensive way to accomplish anything and everything. For those of us who have been working so hard over the past decades, this leads to the obvious question, “can we afford recovery?” I mean, after all, it is usually cheaper to just give someone a drug than to invest in the time and effort needed to bring human spirits back alive to strive and thrive. So I decided to look at this question, from the vantage point of my own singular life.

So, I went through a little journey, remembering my experiences over the years and translating them into 2011 Medicaid equivalent dollars.

My worst year, which in those days didn’t feel as bad as it should have, involved being in in-patient care for one four-month stretch as well as several other shorter stays during the year. In other words, a year that I felt “at home” more that most. In between, when I was out “in the world,” I was attending partial hospitalization 5-days a week, seeing a therapist twice a week and a psycho pharmacologist one time a week. Several of my hospital admissions followed serious suicide attempts that ended up requiring ambulance rides to the emergency room and some stays in the medical hospital before getting transferred to the psychiatric units. And then there were all the meds…. My conservative estimate, converting the costs to 2011 Medicaid equivalency, that single year cost the federal and state governments $208,797.28 in medical and financial assistance, with me unable to contribute in any way to the financial wellness of the government.

In a more “average” year, I would have several inpatient admissions of 2 to 3 weeks in length, partial hospitalization about 75% of the time I wasn’t in the hospital; at least several ambulance rides each year and perhaps some medical treatment. I was almost always in therapy twice a week, and saw a psycho pharmacologist at least one time per month, if not more. I remained on a very high regiment of medications, and relied upon Social Security Disability Insurance (SSDI) and Supplemental Security Income (SSI), and received a housing subsidy. A very conservative estimate of an average year, using 2011 Medicaid Equivalency, comes to approximately $132,297.28 per year.

Unfortunately, the focus of treatment was primarily stabilization, insight, acceptance of limitations, and the constant reinforcement of despair. So, the cycle of an “average” year went on and on, for 29 years. So this $132,297.28 per year was also repeated for 29 years. This means that, ultimately, over those years, taking out my worse year, the grand total cost to the Federal and State governments to maintain and stabilize me totaled $3,704.323.85. And if we also add in my worse year, we’ll see that my total cost to the Federal and State governments was $3,913,121.12. Four million dollars!!

But, really, this isn’t too surprising. Medical care is expensive. As I began to look at my own journey into recovery, physically, emotionally, spiritually and financially, the real message of this exercise began to take hold for me.

My early recovery came about when I found myself in a new setting. It was much more of the external changing the internal than vice versa. I had gone to the BU Recovery Center (a part of BU Center for Psychiatric Rehabilitation) as a volunteer, searching for a way to “structure my time” when my partial hospitalization funding ended. I was not prepared to live a life outside of institutional structures, and, frankly, felt abandoned and terrified. The volunteer gig was just something to do to be out of my house one day a week.

This serendipitous commitment led me to an environment where I heard the word “recovery” applied to emotional distress for the first time in my life. I was nearly 50 years old and had been in services since I was 17, but had never been told I could recover. Instead, I had heard about making “realistic” choices based on the limitations of my illnesses, that I had to have greater insight and be compliant with my ongoing treatment, and needed to keep my illnesses front and center. Now, I’m hearing about “recovery,” and not as a slight possibility for an exceptional few, but as a given for people like me.

In addition to hearing this concept integrated into all the work being done, I was surrounded by people with lived experience of emotional distress and severe emotional states working in many roles – teacher, student, researcher, and university professor. And finally, I was being treated as a person of value, who had something to contribute, and who brought benefit to the organization. No one talked to me about illness, checked in with me about my “symptoms,” or cautioned me about the stress I was taking on.

After two semesters of volunteering, I began the Masters’ program at Boston University in Rehabilitation Counseling, and, as part of that program, began working at a part-time internship. Over this first year of involvement at BU, as I began to develop a life of value in the community, my need to rely on my paid professional supporters to whom I turned for so long began to decrease. I wasn’t being hospitalized or using expensive ambulance, emergency room and other crisis services. I continued to see my therapist, but was able to see my psycho pharmacologist every three months, instead of monthly or biweekly. My burden on the federal and state government dropped dramatically to $36,469.92 per year, and I was now paying taxes on that income. Over the 5 years I consider my “early recovery,” I saved the coffers a total of $479,136.80.

There were bumps along the way, of course. This is real life, not a miracle moment where I was “cured.” But reframing my experiences from an illness based model where I had no control beyond chemical experimentation to one where I could recognize my feelings of dis-ease early and work with a myriad of tools to re-center myself also gave me a sense of self-efficacy, empowerment and hope.

Over time, as my confidence and belief in myself grew, and my image of myself transformed. I no longer thought of myself as broken. I saw myself as someone who had overcome extreme difficulties. I let go of those supports and services I had depended upon, including SSI and SSDI, therapy twice a week, hospitalization, and weekly day treatment.

Someone said once, “Recovery is the right to be a tax-paying citizen.” I purchase my health insurance through my employer, pay my own co-pays. I pay taxes on a full time job and my consulting work, and yes, on my new car.

We now know that recovery oriented services with hopeful environments, professionals trained in promoting recovery, well trained peer support workers who share their strength and hope, can transform the expectations previously held about mental illness. This investment in recovery really pays off. I was shocked as I calculated the cost of the services I received prior to my recovery. I stared at the numbers, and in the end, I had only one question left… 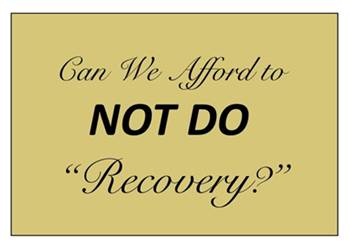