Slightly over a week ago in New York I was subject to a blizzard of questions from a lawyer for Forest, who taking great pleasure in using the word “fucked” in a deposition. Asked, among others, questions about whether it was reasonable for me to compare what happens in clinical trials to rape as was done in the Fucked post:

“You’re accusing industry of raping folks that are engaging in the consent process.”

The idea of Informed Consent came from women.  It took shape in the 1950s centered on access to data about treatments in legal cases around breast cancer treatment and the use of ECT. It moved to center stage in 1965 when Harvard’s Henry Beecher published an article outlining a series of cases from the best institutions in the United States where patients were being exposed to experimental treatments or other forms of research without being aware of what was happening.

Even before this, Louis Lasagna a colleague of Beecher’s, and the first clinical pharmacologist, while based at Johns Hopkins, had introduced consent forms into clinical trials for new investigational agents.  Lasagna figured that all patients taking part in an investigation of a new not-yet marketed drug produced by a pharmaceutical company should be aware that the drug was new and not yet approved – many people were simply not told this. 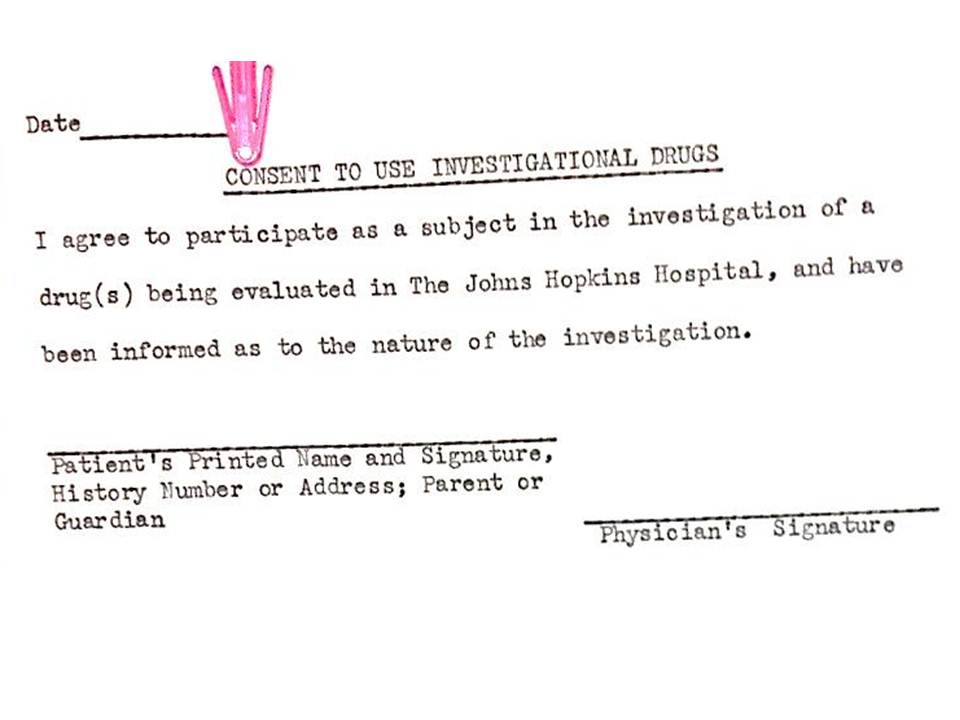 This led him to create the first consent forms – see above. Lasagna raised the idea of consent for drug trials in the Kefauver hearings on the pharmaceutical industry that began in 1959. But these hearings sank out of sight in a political quagmire.

Then in 1962 thalidomide struck. The politicians had to be seen to do something fast. They rushed through a set of amendments to the Food and Drugs Act that required companies to prove their drugs are effective and to do so using controlled trials. They maintained the prescription-only status for new drugs that Kefauver found problematic on so many fronts.

To top it off, for good measure they endorsed consent forms for investigational new drugs and a few years later FDA made them mandatory.

A good idea? Well it meant that FDA had to be involved from the very start of the very first investigation of a new drug. Partly because of that, the length of time a drug spends with FDA increased from a little over a year in the 1950s to over ten years in the 1970s. Companies were handed a stick to beat the FDA with.

Industry were also handed a blank piece of paper. Once they had a chance to think about it, companies felt increasingly strongly that they had to do more to protect the rights of patients. In particular they had to make sure that patients’ data would remain private.  The consent form evolved to include clauses telling study participants that their data would be shown to no-one other than the regulator – what we consenting adults do will remain private.

Translated into English this meant your data and our privacy will be hidden for ever.

It does more.  If you participate in a clinical trial the new industry forms mean you put your children and your wider family and community in a state of legal jeopardy.  Because they can hide the data of your experience in the trial, even if you have been significantly injured by the treatment, companies can declare there were no side effects and your invalidated experience can then be used to deny justice to someone who is injured in exactly the same way you have been.

When these arrangements were introduced, doctors were in charge – they ran the trials and designed the consent forms and had your data in their filing cabinets.  But now groups like AllTrials supported by GSK and other companies are lobbying for restricted access to Trial data that would put you in an even worse position.

This is not the way things have to be.

We still think we are consenting in the way we were up to about the 1970s, when a consensual exploration of the effects of drugs turned into commercial exploitation of our bodies. But we are not.  This is rape.

It is happening most often in places like India and South Africa now where perhaps inhibited by political correctness – the fact that the abuse is predominantly linked to white people of Western origin – the locals have not been complaining.  (Something perhaps for Jose Mario Bergoglio – Pope Francis – to think about as part of his outreach to Asia).

At a time when Britain is grappling with scandals linked to historical sexual abuse by establishment figures, UK PLC is moving toward making health service funding conditional in part on encouraging the rest of us to participate in industry linked trials, and industry are threatening to abandon the UK if the authorities don’t do more to facilitate them. (Something similar is probably true wherever you live also).

If this is not the way you think things should be, you should refuse to participate in trials.  You might also consider explaining what’s going on to any one you know contemplating participating on these terms.