That damn dress. It’s everywhere. And, just as much as anyone, I’ve gotten sucked into staring at the computer screen for way too long from all 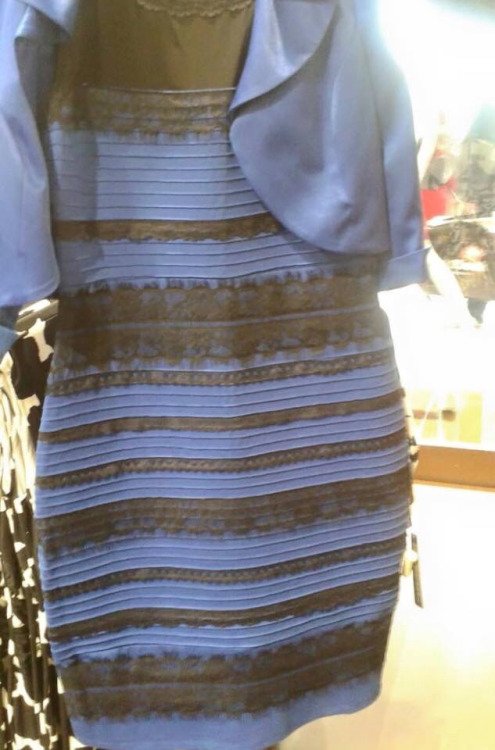 different angles, and relentlessly reading all the articles that have popped up to explain the phenomenon involved. I’ve repeatedly beckoned my kids (and their friends) to the screen, and have been fascinated with the fact that they (son, 12, daughter, 3) both seem to see the dress as black and blue, while I just can’t get past seeing it as white and gold. Much to my husband’s color-blind dismay, I’ve also been pestering him to “look at it now…” and “what about now”… (He sees it as green and white, but never mind.)

I’m as curious as most are to understand the science behind it. However, this week’s water cooler distraction from the horrors of reality has uncovered something that I find much more relevant than simple perception of color. On February 27, Business Insider published an article called “No One Could See Blue Until Modern Times.”  This article (inspired in its way by the color-driven talk of the dress) details some of the history of color. For example, based on a review of literature and various other markers, it’s apparently believed that most ancient cultures (save the Egyptians) did not differentiate blue from green. The article then goes on to detail a study performed with members of the Himba tribe in Namibia. In short, their language does not have a word for blue, and so, when presented with an image of one blue square among several green, they struggled to pick out which one was ‘not like the rest.’ Conversely, the same tribe reportedly has several more words for various shades of green than most other cultures, and as a result, had a much easier time of picking out the ‘different’ green box in the bunch than would most Americans.

Here’s what’s most interesting about this (at least to me): The underlying theme of the article was essentially that having a word for something plays a substantial role in allowing one to see what that word represents.   Now, I spend a lot of time talking about language … and thusly, a disproportionate amount of time defending talk about language. Of course, there are many ways to discredit the language conversation. Here’s but a few examples:

That’s just the new ‘PC’ (politically correct) word: When someone says this, it’s often a way of saying, “We might have to use this word to appease you, but we don’t buy that it has any deeper value or meaning.”

No one will understand me if I talk like that: This particularly misguided retort almost always immediately falls flat on its face given that the push to shift language is almost always in favor of moving toward easy-to-understand, every day words (although admittedly that does have the potential to go awry, too) over clinical jargon.

It makes it hard to speak if I’m always worried I’ll say something wrong: This one’s usually more about the inevitable discomfort that comes with being asked to maneuver through the clumsy process of change than anything else. It’s also about the shame or denial that descends when people feel like they’re being asked to change because they were doing something ‘wrong,’ which is hard for some to swallow without protest (even when feedback is offered kindly).

You’re just the language police: Translation: “You’re trying my patience,” and/or, “I don’t take you seriously,” and/or “I don’t have time for this,” and/or “Please, shut up.”

It doesn’t matter what words someone uses, it’s what they mean that counts: This is often the last bastion of resistance offered up by people who are feeling defensive. It’s also got some truth to it in some contexts (as do all of these points, I suppose), but in many instances it’s simply not true enough.

But, back to the article. Here’s a key quote:

“It’s about the way that humans see the world, and how until we have a way to describe something, even something so fundamental as a color, we may not even notice that it’s there.”

If this is true (and it certainly appears that it is), then what does it mean for the way that people make meaning of their experiences of emotional and mental distress? We live in a culture that virtually imprisons its citizens within a one-size-fits-all way of interpreting humanity, and force feeds medicalized language on a daily basis. People are not generally exposed to the many much more nuanced ways of understanding hearing voices, suicidal thoughts, deep demoralization, self-harm, and other various extreme or unusual experiences. The mass majority have no idea about the real potential impact of trauma or nutritional sensitivities and have never heard phrases like ‘spiritual emergency.’ For those of us for whom this sort of talk has become commonplace, it’s critical we not lose sight of the fact that our perspective is closely related to our living (at least in part) in a “Mad in America” (or other similar) bubble.

And, for better or worse, living in that bubble is perhaps a large part of what allows us to see a fuller spectrum of truth. No, it’s not only perception of color that is impacted by our words; It’s also perception of self (and others). If we follow this line of thinking, it seems we have to accept that using a solely medicalized lexicon is quite literally obscuring the paths that we now know, for some, are life saving. What is it like to live in a world of mentally ill, decompensating, non-compliant, low functioning, schizophrenic, bipolar, borderline, suicidal ideation (etc.)? Many of us know, and it’s not pretty. But what’s even less ‘pretty’ is that so many still aren’t aware that there are so many other words and ways to see and understand, and so they can’t even recognize the grayness with which they’re living.

With this knowledge, all the above excuses fall away. If we do not speak to the different shades of meaning, to the different tools of healing… If we resort to the same, old, black-and-white words we’ve been given by those who are often limited in vision themselves… we are doing no less than participating in the willful blinding of our own people. Perhaps the greatest power behind supports like Hearing Voices and Alternatives to Suicide groups is not so much (or at least, not only) the ability to speak openly about our own experiences, but rather the opening of our eyes to different ways of seeing based on hearing new words and ideas from others.  New and expanded sight can be developed when the world around us presents us with more choices and the space to explore them.  This is something that I hope we can all keep in mind; Especially those among us who continue to use such one-note terminology primarily to gain acceptance in professional circles.

If we know that such acceptance comes at the price of blinding others to the paths that may lead them out of this particular mire, is it worth it in the end?

What do you see because of the words that you know?  What are you missing?