Many experts expressed concern when the rate of antipsychotic prescriptions to children in foster care showed a rapid increase, peaking in 2008, and new recommendations and policies have tried to curb the use of these drugs. While the rate has plateaued, a new study points out that the “new normal” prescription levels are still dangerously high. The data reveals that almost one in ten children in foster care are currently being prescribed antipsychotic drugs with dangerous side-effects, many for diagnoses like ‘ADHD’ and disruptive behavior. 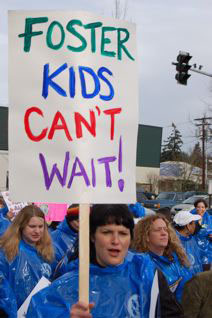 “Persistently high rates of treatment with antipsychotics, particularly among foster children, alongside gaps in metabolic monitoring, overreliance on the use of multiple concurrent antipsychotic medications, and underuse of psychosocial interventions, underscore enduring behavioral health care challenges,” the study authors write.

Practice and policy recommendations based on the research describe these drugs as a “last resort” and suggest therapy and psychological services as a first-line treatment. The new analysis published in Health Affairs, however, shows that more than one-third of children in foster care are put on antipsychotics before ever being offered counseling or therapeutic interventions.

“Despite the apparent stabilization of prescribing rates, the policy challenges of persistently high antipsychotic use in foster children remain, as do the difficulties with timely access to psychosocial interventions as the first line of treatment,” the researchers write.

Research has also linked the use of antipsychotics with psychiatric side-effects, potentially inducing “zombie-like” sedation, cognitive and memory impairments, and symptoms associated with obsessive compulsive disorder and psychosis. Also, evidence that antipsychotics can cause brain shrinkage and brain damage over the long term has been accumulating for several years now.

The FDA has approved the use of antipsychotic drugs in children for only schizophrenia, bipolar mania, irritability associated with autism, and Tourette syndrome. Even for these indications, however, critics have pointed out that much of the research offered in support have been brief trials and that “many have been sponsored by industry.”

But the latest study shows that these drugs are frequently being prescribed “off-label” to foster kids who do not have any of these approved diagnoses. For example, almost 40 percent of all foster children diagnosed with ADHD and disruptive behavior were prescribed an antipsychotic.

The researchers suggest that we need to garner “substantial new public investment in evidence-based psychosocial interventions” as alternatives.

“Such interventions for children with disruptive behaviors include parent-child interaction therapy for young children; anger management skills training for preadolescent children; and intensive family- and community-focused interventions for adolescents, such as multisystemic therapy, an intensive homebased intervention that teaches caregivers how to monitor and discipline children and adolescents, how to disengage them from deviant peers, and how to engage them in prosocial activities.”

“Is It Her Hormones?” A Case of Psychiatry Missing the Mark

Experts Decry Dangerous Use of Antipsychotics in Children