In this piece for Science of Us, Lee Daniel Kravetz discusses the impact of media exposure on the rise of bulimia and explores the social contagiousness of both healthy and disordered eating behaviors.

“Following the debut of bulimia nervosa in the DSM-III, the University of Chicago put out a press release publicizing its own rather novel data on a kind of sequela of anorexia. Mademoiselle and Better Homes and Gardens, among other popular women’s magazines, took the press release and described the effects of a new “binge-purge syndrome” making inroads into American culture. With Russell’s data proliferating among diagnosticians, and the term itself entering the lexicon through trendy magazines with wide distributions, cases of bulimia rose steeply. Once people realized they were able to eat whatever they wanted and as much as they wanted without a weight consequence, binging and purging became the new strategy for weight management. It was no coincidence that these unhealthy and harmful behaviors took hold at the same time that obesity — which the researchers Nicholas Christakis and James Fowler have found to be as contagious as any eating disorder — doubled in the US.

The theory of media’s culpability in the spread of social contagions is not a new one. Psychologists studying the developmental psychopathology of eating disorders have led dozens of controlled experiments finding a near-perfect link between mass media and eating disorder symptoms. The question in my mind now isn’t whether media have a part to play in replicating social contagions; if we were able to purge ourselves of certain conduits of influence like media itself, we might have an easier time stopping transmission. Rather, I question just how big a part media actually play in spreading them.” 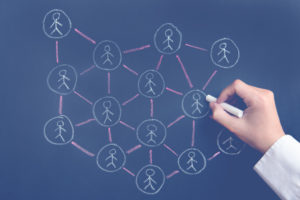