From Vox: Recently, psychologists Patrick Forscher and Nour Kteily surveyed members of the alt-right to build the first psychological profile of their movement. Compared to the control group, the alt-right scored dramatically higher on dehumanization measures, support for groups that work for the benefit of white people, willingness to express prejudice toward black people, and authoritarian personality traits.

“A lot of the findings align with what we intuit about the alt-right: This group is supportive of social hierarchies that favor whites at the top. It’s distrustful of mainstream media and strongly opposed to Black Lives Matter. Respondents were highly supportive of statements like, ‘There are good reasons to have organizations that look out for the interests of white people.’ And when they look at other groups — like black Americans, Muslims, feminists, and journalists — they’re willing to admit they see these people as ‘less evolved.’

But it’s the degree to which the alt-righters differed from the comparison sample that’s most striking — especially when it came to measures of dehumanization, support for collective white action, and admitting to harassing others online. That surprised even Forscher, the lead author and a professor at the University of Arkansas, who typically doesn’t find such large group difference in his work.

There was a time when psychologists feared that ‘social desirability bias’ — people unwilling to admit they’re prejudiced, for fear of being shamed — would prevent people from answering such questions about prejudice truthfully. But this survey shows people will readily admit to believing all sorts of vile things. And researchers don’t need to use implicit or subliminal measures to suss it all out.” 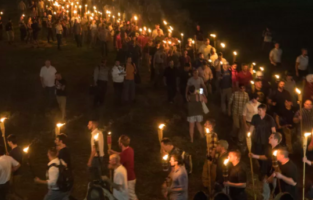