From The Scholarly Kitchen: We may be in a new phase of corporation-funded research. According to the 2016 Science & Engineering Indicators from the National Science Board, 65.2 percent of research funding now comes from the business sector.

“Pollution of the scholarly literature by corporate influence could lead to decreased trust in the results published in peer-reviewed journals and other outlets (monographs, for example). We’ve seen this many times with studies of nutrition. While not directly tied to the success of “fake news” and propaganda campaigns more generally, these placements do make it harder to point to a standard of truth against which other information sources can be justly measured.

Given the promulgation of large corporate interests wanting to use scientific reports as a megaphone, there are more and more reasons to check on the employment status of authors, the funding underpinning research, and the completeness of disclosures or even authorship lists. What was once mainly a concern for medical journals is now becoming a concern in many other areas, as larger corporations see research publication as an effective adjunct to lobbying, promotion, and public relations.” 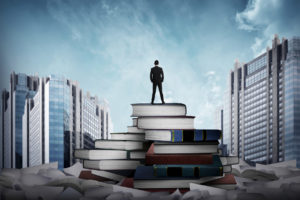