In this piece for The Washington Post, Scott Higham and Lenny Bernstein investigate how a handful of members of Congress, allied with some of the nation’s major pharmaceutical companies, passed a bill weakening the Drug Enforcement Administration’s ability to take action against drug distributors suspected of supplying narcotics to the black market. The new law makes it virtually impossible for the DEA to freeze suspicious narcotic shipments from drug companies.

“Political action committees representing the industry contributed at least $1.5 million to the 23 lawmakers who sponsored or co-sponsored four versions of the bill, including nearly $100,000 to Marino and $177,000 to Hatch. Overall, the drug industry spent $102 million lobbying Congress on the bill and other legislation between 2014 and 2016, according to lobbying reports.

‘The drug industry, the manufacturers, wholesalers, distributors and chain drugstores, have an influence over Congress that has never been seen before,’ said Joseph T. Rannazzisi, who ran the DEA’s division responsible for regulating the drug industry and led a decade-long campaign of aggressive enforcement until he was forced out of the agency in 2015. ‘I mean, to get Congress to pass a bill to protect their interests in the height of an opioid epidemic just shows me how much influence they have.'” 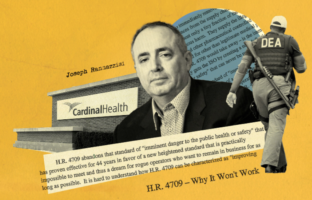