From The New York Times: According to the first governmental account of nationwide drug deaths to cover all of 2016, drug overdose deaths increased by more than 22 percent from 2015 to 2016. Drug deaths involving fentanyl more than doubled during this time, accompanied by an upturn in deaths involving cocaine and methamphetamine.

“Deaths involving prescription opioids continue to rise, but many of those deaths also involved heroin, fentanyl or a fentanyl analogue. There is a downward trend in deaths from prescription opioids alone. At the same time, there has been a resurgence in cocaine and methamphetamine deaths. Many of these also involve opioids, but a significant portion of drug deaths — roughly one-third in 2015 — do not.

The explosion in fentanyl deaths and the persistence of widespread opioid addiction have swamped local and state resources. Communities say their budgets are being strained by the additional needs — for increased police and medical care, for widespread naloxone distribution and for a stronger foster care system that can handle the swelling number of neglected or orphaned children.” 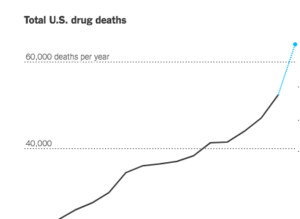