From the Boston Review: In his new book Doctors in Denial: The Forgotten Women in the “Unfortunate Experiment,” Ronald W. Jones chronicles the history of New Zealand’s largest medical research scandal. Unlike the Tuskegee syphilis experiment scandal in the U.S., the medical scandal in New Zealand was responded to with adequate repercussions for the doctors involved as well as rigorous policy reforms, keeping New Zealand medical research scandal-free ever since.

“For a more instructive example of how to respond to abusive research, consider New Zealand. New Zealanders had their Tuskegee moment in June 1987, when Metro magazine published the investigative report ‘An Unfortunate Experiment at National Women’s.’ According to the report, women with cervical cancer in situ had been deceived and mistreated for years at a prestigious Auckland hospital. This revelation led to an official government inquiry, six months of public hearings, and, most importantly, far-reaching reforms that have effectively prevented any further such abuses. The story of the ‘unfortunate experiment’ and its aftermath is told in an important new book by Dr. Ronald W. Jones, an obstetrician-gynecologist at National Women’s who played a central role in exposing the scandal.

The publication of this book is a major event, and not simply because it is rare for a medical whistleblower to write with such deep knowledge and clarity. Unlike the Tuskegee study, the ‘unfortunate experiment’ barely registered with medical researchers outside New Zealand. Even in the academic discipline of bioethics, which developed at least partly because of U.S. research abuses in the 1960s and ’70s, the ‘unfortunate experiment’ is rarely taught or discussed.

This is a puzzling oversight. In many respects, the way New Zealand handled the ‘unfortunate experiment’ should be a model for the rest of the world. Whistleblowers spoke out; the press did its job; the authorities investigated and said: No more. Then the government instituted reforms that have kept New Zealand medical research scandal-free for nearly thirty years. Why has the world paid so little attention?” 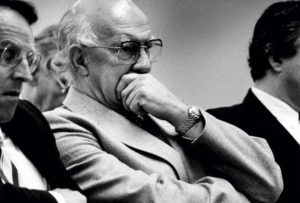